Stow, Mass – Autumn is in the air, and everybody in the greater Boston area is in a good mood. I thought it was just in the pink house, or maybe on our street, but then I read this hilarious article in The Onion, and I realized this is a seasonal disorder that affects everybody in town.

To celebrate the season, we drove out to our favorite apple orchard at Honeypot Hill. I confess that we have been coming to Honeypot Hill for apples for years – since long before the twins. But now it’s even more fun. What’s so great about it? 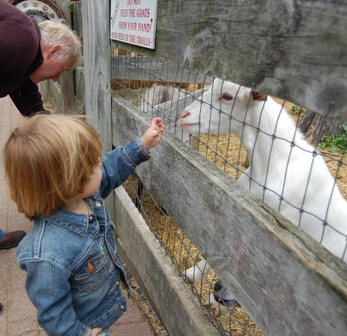 Goats and sheep, plus the three little pigs. They have this contraption that takes the food up to a platform and dumps it out for the goats to eat, which is pretty fun. But the twins really like feeding the goats one tiny piece at a time out of their hands. They tend to do this directly in front of the sign that says “Do not feed the goats from your hand.” C’mon, S, can’t you read? 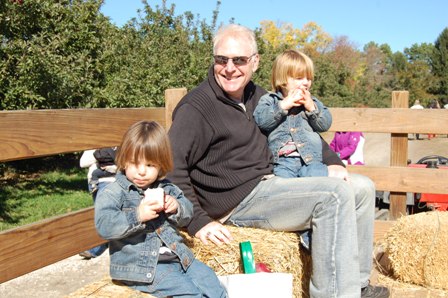 Hayrides to and from the apple orchards. Highlight of the day, right there.

Hedge mazes. They say the Green Monster hedge maze is the largest in North America (!). But we stuck to the Mini Monster. Unfortunately I did not get a photo of this because I was too busy trying to keep track of the twins. Upon entering, V took off as fast as he could and the rest of us tore after him. It took us 5 minutes to get to the center and 30 minutes to get out (and we picked up an extra kid on the way). 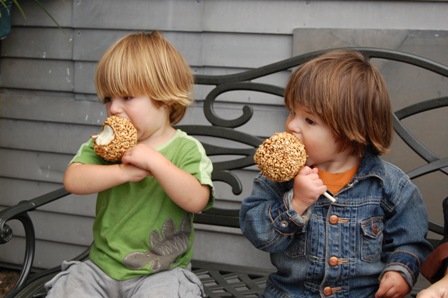 Caramel apples. This is where I claim my lost childhood. I was never really allowed to eat caramel apples – at least that’s how I remember it. As a result, I so relish my annual caramel apple from Honeypot Hill. Twins finished theirs off in the car on the way home. Boy were they sticky.
Even without the caramel, these apples are amazing. We like McIntosh. We did a taste test comparing them to the McIntosh I bought at our local farmers’ market last weekend, and it wasn’t even close. We might have to go back before this season is over.
food, massachusetts, new england