I finally found a legitimate reason to suck up the $25 (!) admission fee and check out Boston’s newest attraction. A decade after being destroyed by fire, the Boston Tea Party ships are once again docked at Griffin’s Wharf, alongside a fancy new interactive museum.

The museum is a remarkable contrast to Boston’s other historic sites, using lots of bells and whistles to make sure you are paying attention and having a good time. Your hosts are actors decked out in period dress, playing the roles of Samuel Adams and other patriots, doing their best to incite a raving mob.
Visitors are also given historic names and identities and – in some cases – lines to read during the rowdy meeting. Everyone is encouraged to shout “Huzzah!” when they like what they hear or “Fie!” when they don’t. (This latter expression is accompanied by a highly offensive thumbing of the nose, which all the kids present seemed to appreciate.) 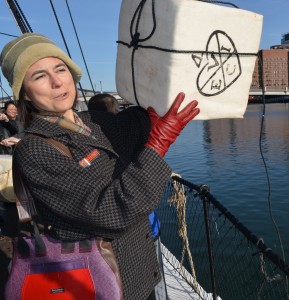 Once the patriots have rallied the support of the assembled, the mob makes their way onto the fully-rigged Eleanor (a full-scale replica of the actual ship) to throw crates of tea into the harbor.
It’s all good fun. But the actors also offer a pretty comprehensive explanation of the revolution’s most catalytic event. For $25 I would hope to learn something that I did not know before, and I did (which is more than I can say for the Duck Boat!). For example, the patriots took great care to destroy all the tea on board the ships, but none of the other cargo. Although the ships were swarming with hundreds of men, they were not damaged, save for one padlock that was broken. It was replaced the following day with a note of apology. Indeed, even the crew remained on board the ships, with promises that they would not be harmed.
After the uproar on board the Eleanor, the multimedia extravaganza commences. We witnessed a discussion between two holographic women “on the street” in December 1773, one a patriot and the other a Tory, demonstrating the divisiveness of this event. There is a somewhat hokey audio presentation about Robinson Half Chest, an authentic tea crate that is the museum’s one actual artifact. And there’s a virtual debate between the “portraits” of Sam Adams and King George (like the Hogwarts Headmasters in Harry Potter), which gives an overview of the Intolerable Acts.
The museum experience ends with a video about Paul Revere and William Dawes’ rides and the first battle on Lexington Green on April 19, 1775. I liked the video, which dramatizes the events we have read so much about, though I could have done without the sing-along of My Country Tis of Thee at the end. 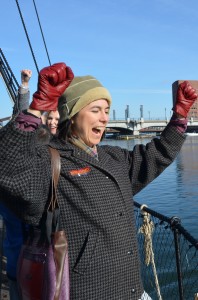 The whole thing takes an hour, though you can return to the Eleanor and the whaler Beaver to explore independently and spend as much time as you want.
I still think the admission price is awfully hefty, but it’s probably worth it if you take advantage of one of the promotional deals. (Eg, in winter, admission is free if you purchase a tour on the Old Town Trolley.)  There’s also a 10% discount if you buy your ticket online.
In short, it’s a fun way for school-age children to learn about and actually participate in the Boston Tea Party. It’s not for toddlers and younger kids, though. My twins stayed at home. If you have wee ones, take them next door to the Children’s Museum.
boston, history, museum, new england, revolutionary history