Central Valley, Costa Rica – Besides treating the family to a fabulous adventure, I am also researching a guidebook. Supposedly.

I have to admit I’ve gotten a slow start. In fact, we might be moving backwards. Twin V has been on-and-off feverish since we arrived, though he’s fine as long as we keep him plied with Tylenol. Daddio’s computer crashed our second day, which makes it next-to-impossible for him to do his work (and for me to write this blog, I might add). And, grandparents are not here yet, so we have no back-ups.
I decided that if I’m going to get any work done at all, I’ll just have to bring the family along.

Yesterday we dropped Daddio off at the local internet cafe as he has his own deadline that he’s facing; and Twins and I set off to Guayabo National Monument, which is the country’s largest and most important archaeological site. It does not really compare to the Maya sites that we have seen in Guatemala and Belize, but it’s pretty intriguing, partly because historians know so little about the peoples that inhabited it. But they did leave behind stone roadways, residential mounds and an impressive aqueduct system (which supposedly still works!?).
The twins were not that impressed with the archaeology, but they did enjoy exploring the walking trails, mostly from the comfort of their stroller, since it was raining. 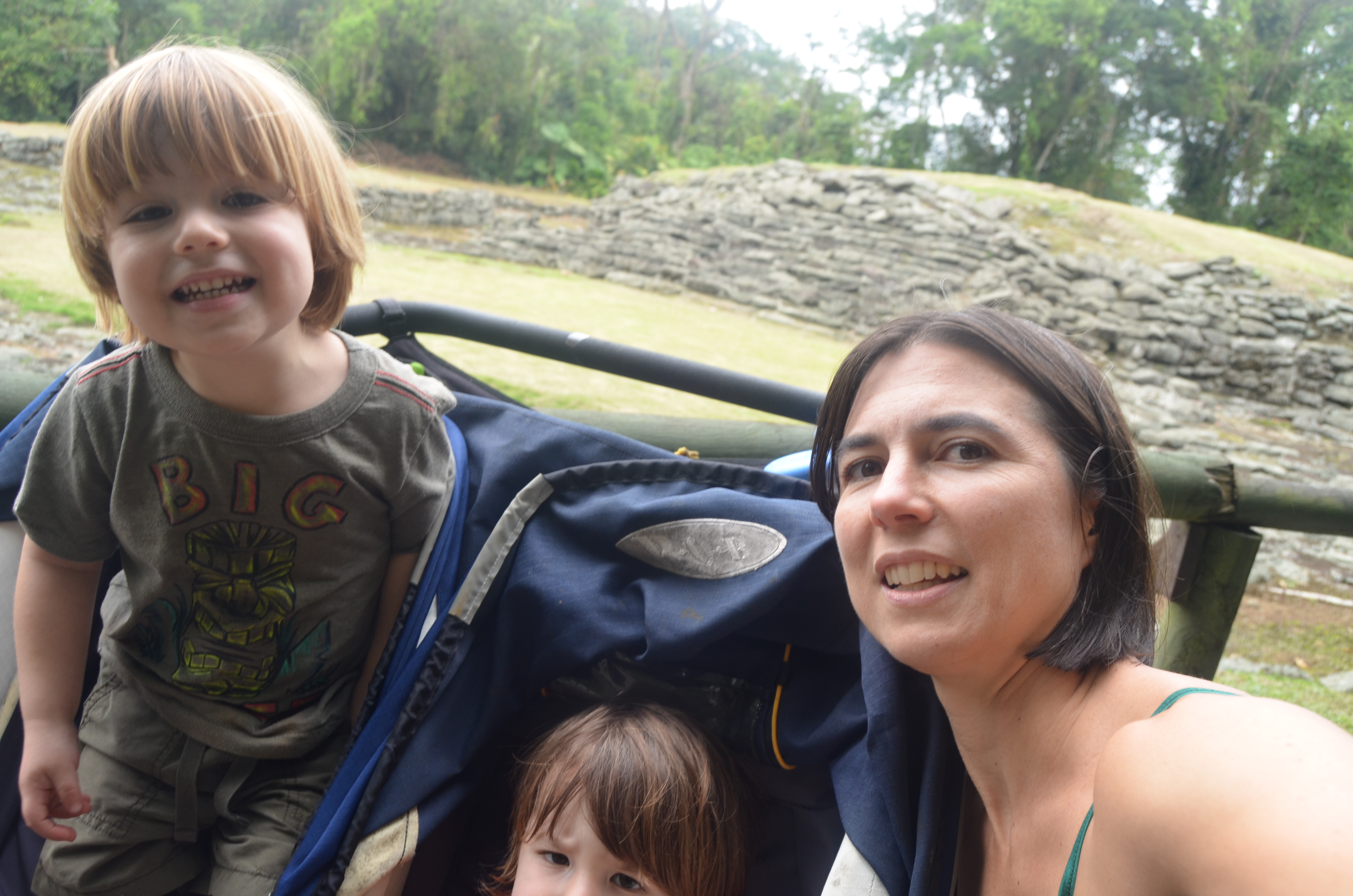 Actually, I was hesitant to let them out of the stroller, as the ancient ruins invited running and climbing, but that would probably be frowned upon. So when they started to get antsy, I wheeled them back to the entrance, where they could climb on the stairs and run up and down the ramp at the visitors center. Do I know how to show my guys a good time, or what?
I’m sure it’s not the most exciting day the twins will have in Costa Rica (at least I hope not). But they liked it okay. At least they didn’t complain, so they must have liked it. And, bonus, I got started on my work!

I counted yesterday as a success, so today we decided to try again. This time Daddio accompanied us and we drove to the former colonial capital at Cartago. This is the site of the country’s most important religious pilgrimage site, the Basilica de Nuestra Senora de Los Angeles. We plunked the kids down on the plaza in front of the church and let them go – running, chasing pigeons, pushing the stroller around – and I took off to do my work. When I came back an hour later, they were still going at it.  I was reminded of #5 in my list of Top 10 Reasons to Travel with your Kids: Every destination has something to entertain your kids. 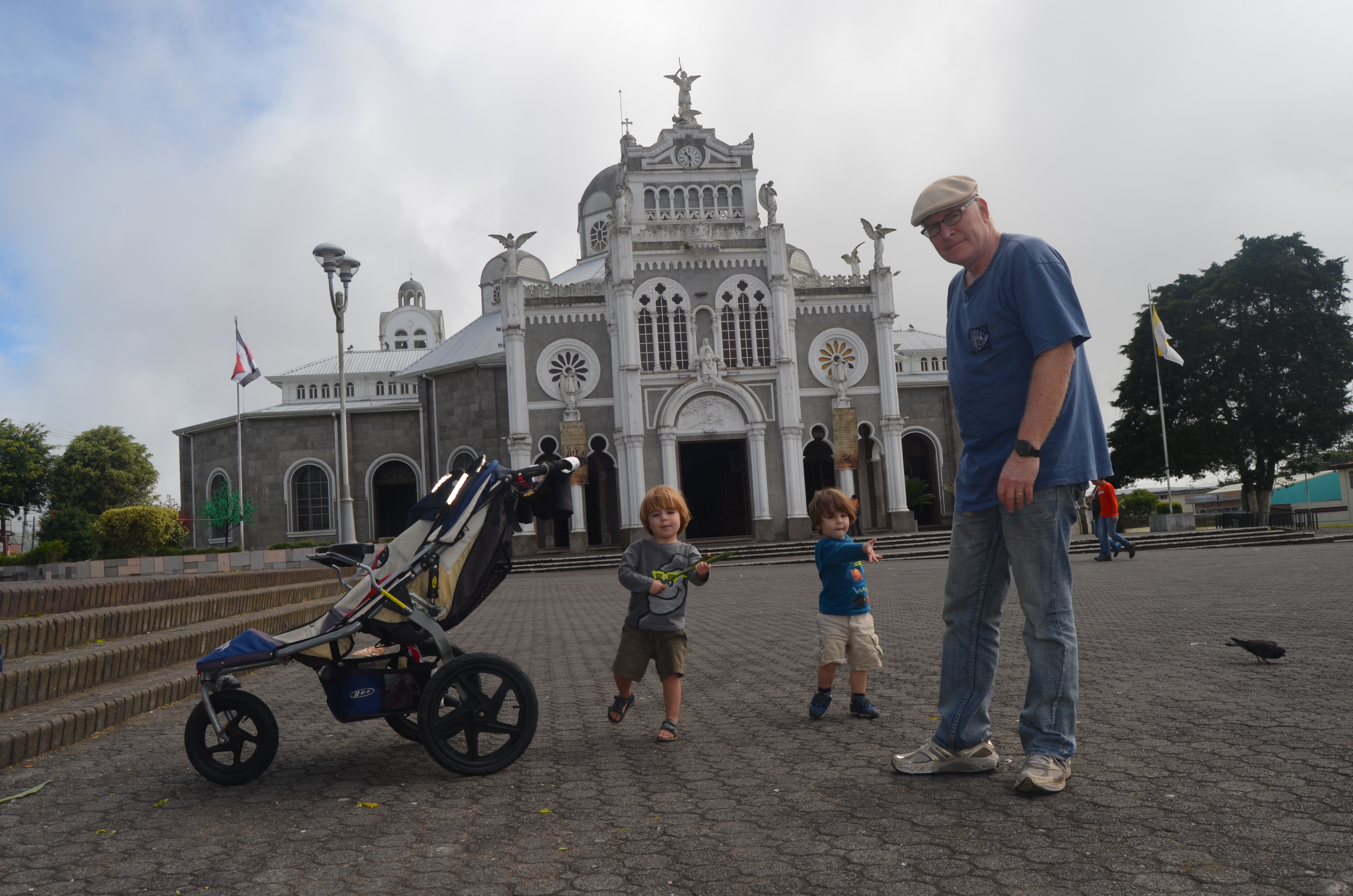 Then we walked down to the city’s other “sight”, the ruins of another church, Las Ruinas de la Parroquias. The crumbling walls now contain a blooming garden and – ’tis the season – a manger scene, complete with live animals.
That was pretty good: but the best was yet to come. There, in front of the ruins, making loops around the central square, was a shiny red kiddie train. Their day was made. 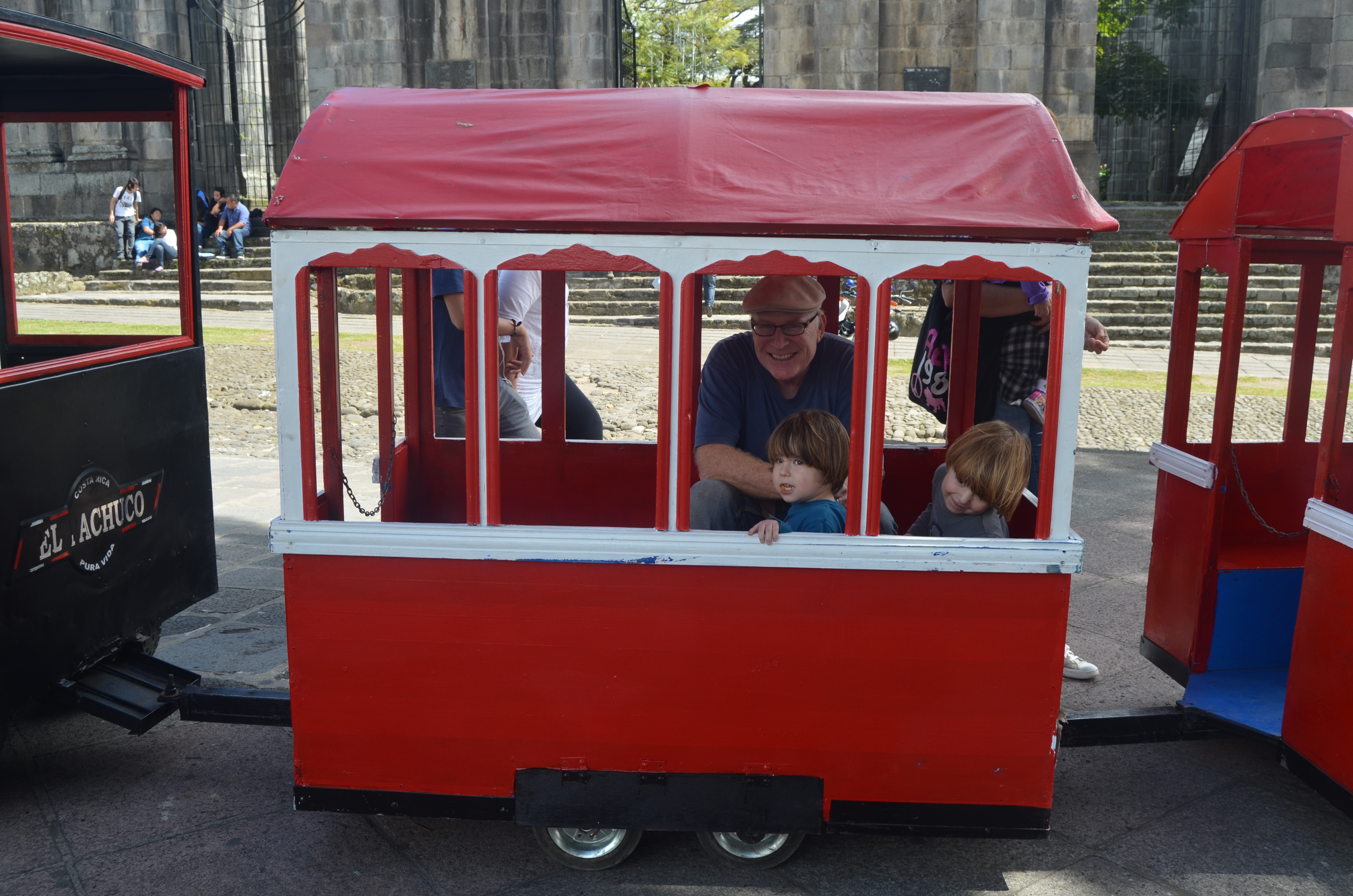 From Cartago, we drove south through the spectacular Valle de Orosi. I was glad that I was not driving, because Daddio really had to keep his eyes on the road, but I was free to take in the amazing mountain vistas. This is a gorgeous, little-trafficked route, replete with old charming old churches, inviting hot springs and miles and miles of coffee-covered hillsides. 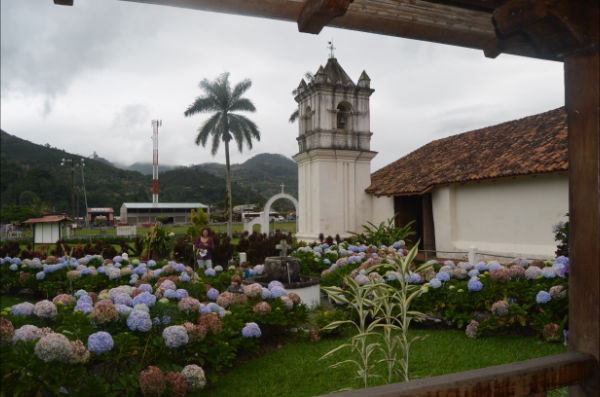 The twins did not really appreciate the scenic drive. But nobody’s complaining, because they fell asleep.
So I celebrated another successful day and checked two more destinations off my to-do list. (3 down, 43 to go. Ouch.)
central valley, church, costa rica, hike, hiking, ruins