La Fortuna, Costa Rica – Daddio and I like to go to the zoo. (In fact, one of our first “dates” was to the National Zoo in Washington DC, but that’s another story.) As a result, the twins are pretty regular visitors to zoos all over the world.

Here in Costa Rica, they have something even better than zoos, which is rescue centers. They perform all the functions of a zoo – entertaining and educating my kids – but the animals are supposedly rescue cases. That means they were not bred for captivity or captured from the wild; in most cases they were kept as pets (which is illegal) or they were injured or for some other reason they would be vulnerable in the wild. So the rescue center provides a hopefully comfortable habitat where they are safe; and they can also entertain and educate my kids. If it’s done correctly, this concept is a win-win-win.
One of the attractions of The Springs Resort & Spa was the Wildlife Rescue Center on the resort grounds. This morning, we spent an hour there before resuming the important business of soaking and swimming and sunning.
It was a bit of a debacle getting to the place, which is not within walking distance from the hotel. It’s accessible only by shuttle bus, for which we waited for at least 30 minutes. When we finally arrived at the rescue center, the guide told us we would have to wait 45 minutes for the next tour. I balked. I am well aware that the twins have a limited window, and I wasn’t about to waste it waiting in the hot sun for a guided tour.
The guide finally said we could explore the rescue center independently “at our own risk” and then he left. We had the place to ourselves. (Yes, the animals were in cages, so I’m not sure what the risk was.) 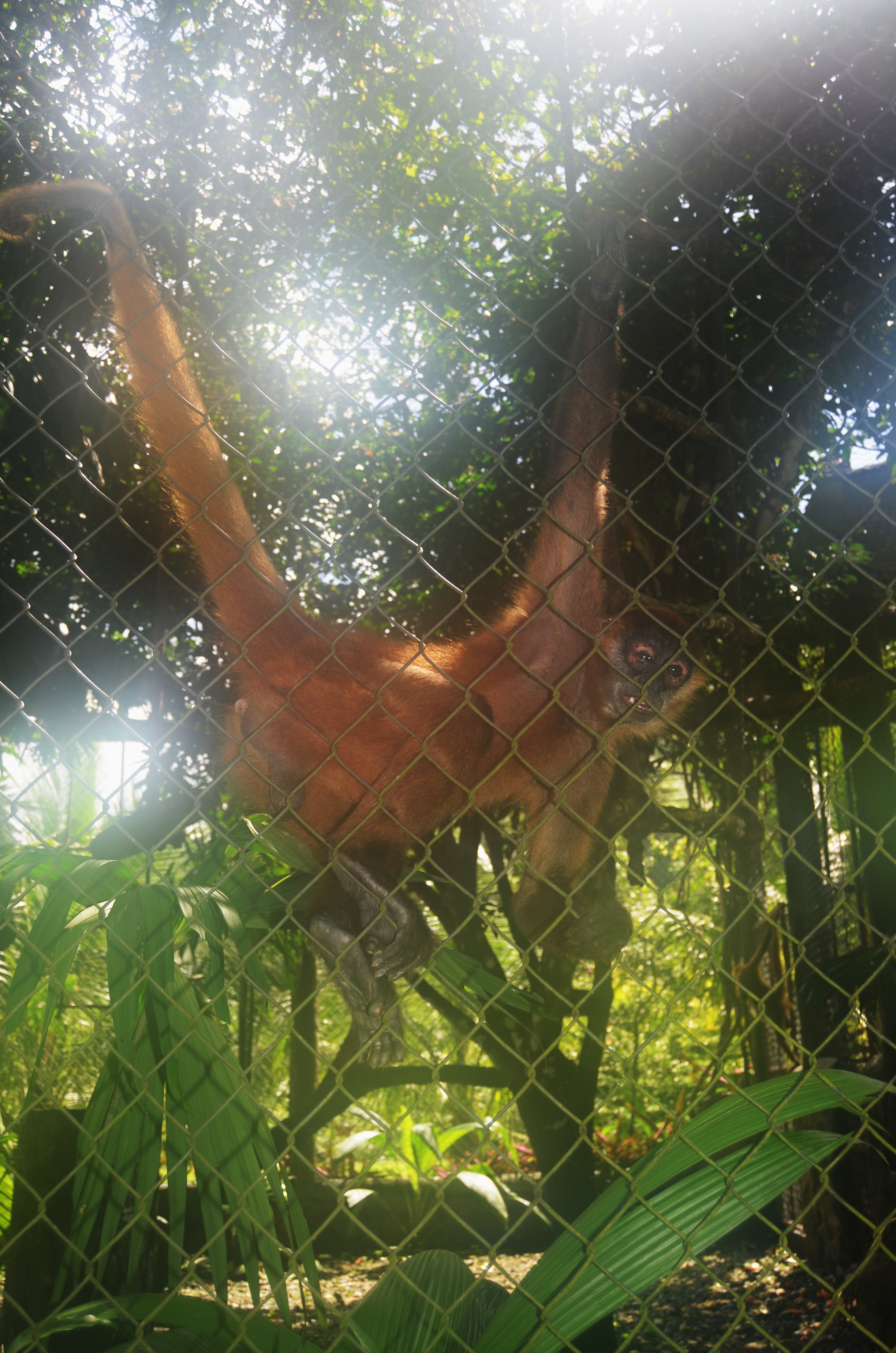 It’s a compact facility that is home to a couple kinds of monkeys and many of Costa Rica’s indigenous species of felines. Cats are always a highlight for me, so I thought this was a pretty good array of animals for such a small space. But they were all in cages without much room to run and few natural features like rocks, trees, pools, etc.
Nonetheless, it was a pretty rewarding visit. The white-faced capuchin monkeys were all having breakfast when we arrived. In another cage, a tiny newborn spider monkey latched onto its mother. Our presence caused the father to go into defensive mode, spreading his limbs wide across the front of the cage and always staying in between us and the baby.
Most of the felines were rescued from captivity, so they are not shy at all, which allowed for fantastic up-close views of ocelots, margays, a jaguarundi and a puma. Many of the cats had sad stories about how being raised in close quarters did not allow for bone and muscle development. While the rescue efforts seem laudable, it made me wonder if their current living conditions are much better?
One adorable puma cub really wanted to play with the twins, who seemed to be the perfect size for him. He kept launching sneak attacks on Twin V from inside his cage. Watch out, Twin V! 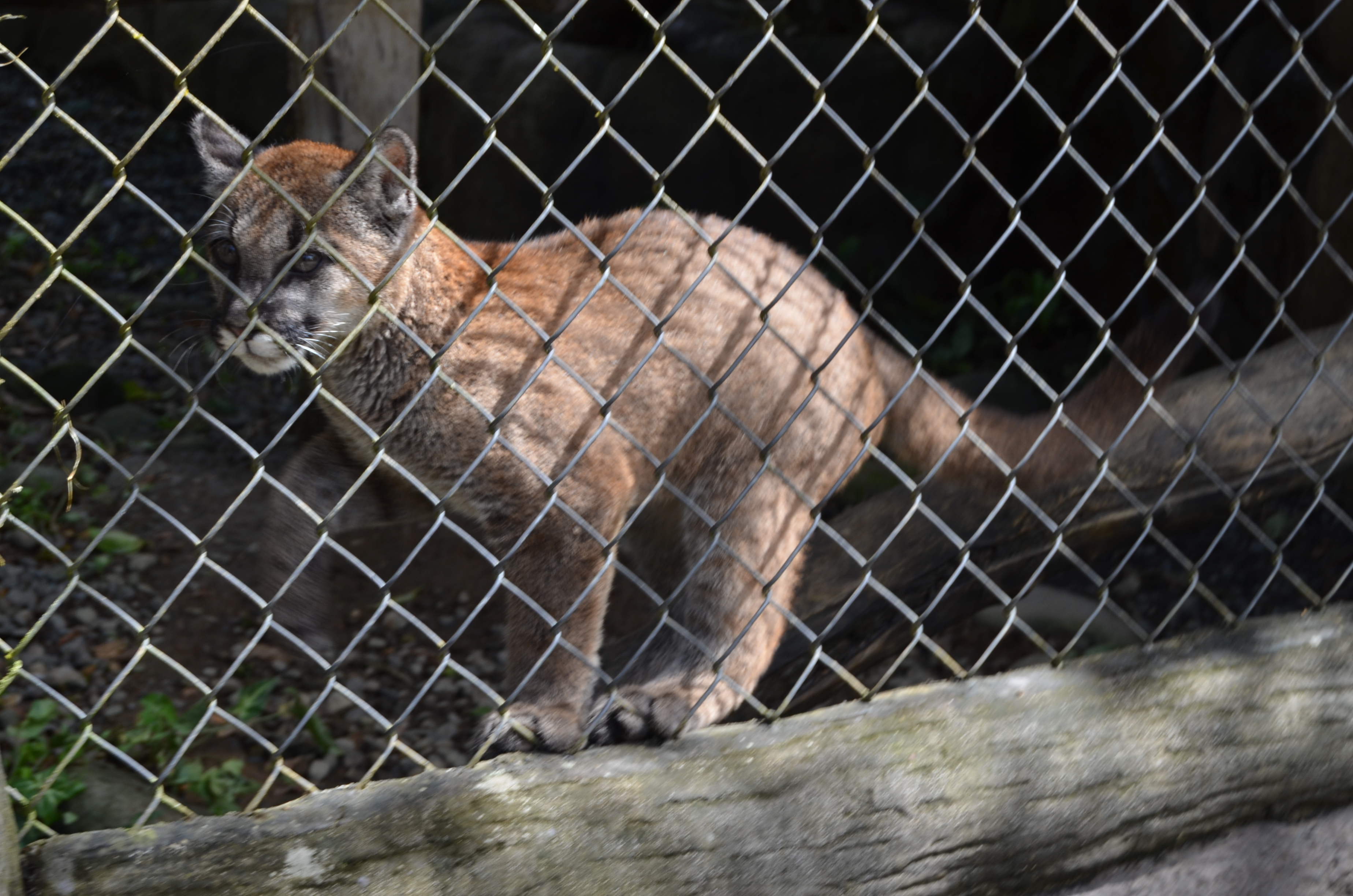 One memory from my childhood is that whenever we went to the zoo it was always sweltering hot. That was also the case this morning, so we cut short our visit. Unfortunately we still had to wait for the shuttle bus to return, and everyone started to get cranky. The rescue center was a nice little diversion; but by the time it was finished, I was wondering if it was worth the effort.
Then we made it back to the pools, slipped back into the welcoming water and ordered a smoothie from the swim-up bar; and all was right with the world. 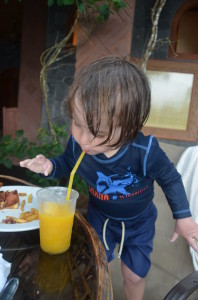 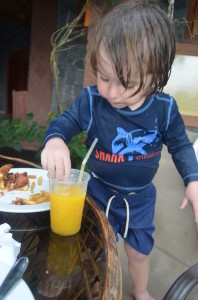