Boston, Massachusetts – On our visit to the MFA today, we had a completely different experience at the museum-hosted play date than we did last month, which supports my theory that the MFA is still trying to figure out the best format for these events.

Last month I commented that the play dates seem amazingly organized for an open event, accommodating all-comers with no preregistration or anything. I might have to take that back. Today we waited at least 45 minutes for our docent to take us into the gallery. I guess we might have arrived a few minutes late, and all of the docents were already in the galleries with their groups, so we had to wait for one to finish up. Considering how the twins feel about coloring (not very good), it was not easy to keep them occupied for all that time. Thank goodness for the Lime Green Icicle.
Coincidentally, the groups are always organized by color, and today we were in the lime green group. So the twins learned a new color. It was good timing, because Twin S has been asking me what color does yellow and green make, and I didn’t really know what to tell him. (At first I said “chartreuse” but he wasn’t really satisfied with that answer.)
Anyway, when our docent finally came to collect her group, she was obviously aware that she was short on time, so she rushed us all into the gallery. Let me tell you, the twins do not like to be rushed. Twin S was insisting on bringing crayons into the gallery, and I was pretty sure that was not going to fly with the museum administration. So it took us a while to put the crayons away and make the transition to the next activity. Then the twins insisted on waiting for the super slow elevator instead of taking the stairs. By the time we got into the gallery, we had missed the part of the program where the kids were actually encouraged to look at the art. And what a shame, because we were in the Model Ship gallery!
A few weeks ago, I filled out a survey about our experiences at the MFA. They wanted to know the top three things/themes that interest my children. My list was easy:
(1) Trains
(2) Airplanes
(3) Diggers
I was skeptical that the museum would be able to find any art addressing these themes. But they did come up with the next best thing: the model ship gallery is really impressive.
Anyway, we arrived just in time for the story, which was Sheep on a Ship by Nancy Shaw. The twins are crazy about books, and they were totally into the book about a year on a pirate ship that we had been reading at home. But they couldn’t stay focused on the sheep. They were not sitting close enough to see the pictures, due to arriving late. And I think they sensed my own frustration with the program. Twin V kept asking to go home, and I almost obliged him.
Then before I knew it, the book was over and the docent was ushering us back to the Shapiro Courtyard for the craft. I had had enough. I ditched the group.
Once the rest of the children left, the twins and I were able to wander around the gallery in peace, examining all the ships and picking our favorites. We all relaxed – and did what we came to do. There are a models of some local favorites, including the Constitution and the Flying Cloud, as well as the gigantic centerpiece Valkenisse. And the massive seascape painting (by Fitz Henry Lane, I think) is also pretty eye-catching, so that provoked some discussion too. 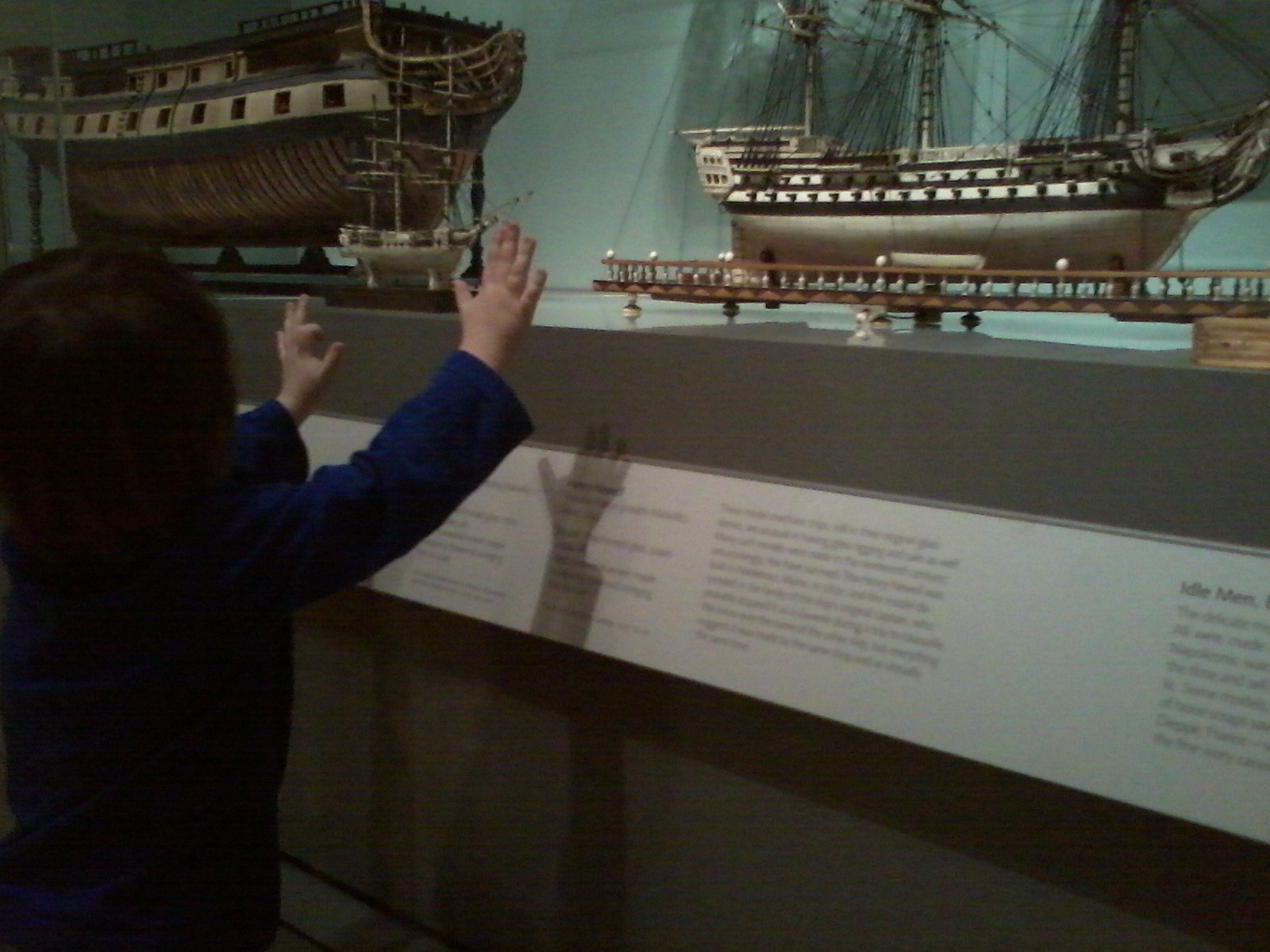 By the time we made it back to the Shapiro Courtyard, a lot of the other kids were gone. But they were still handing out modeling clay and pipe cleaners and empty toilet paper rolls so kids could make their own sculptures. Twin S made a delicious-looking pizza (yes, we were well on our way to lunchtime). 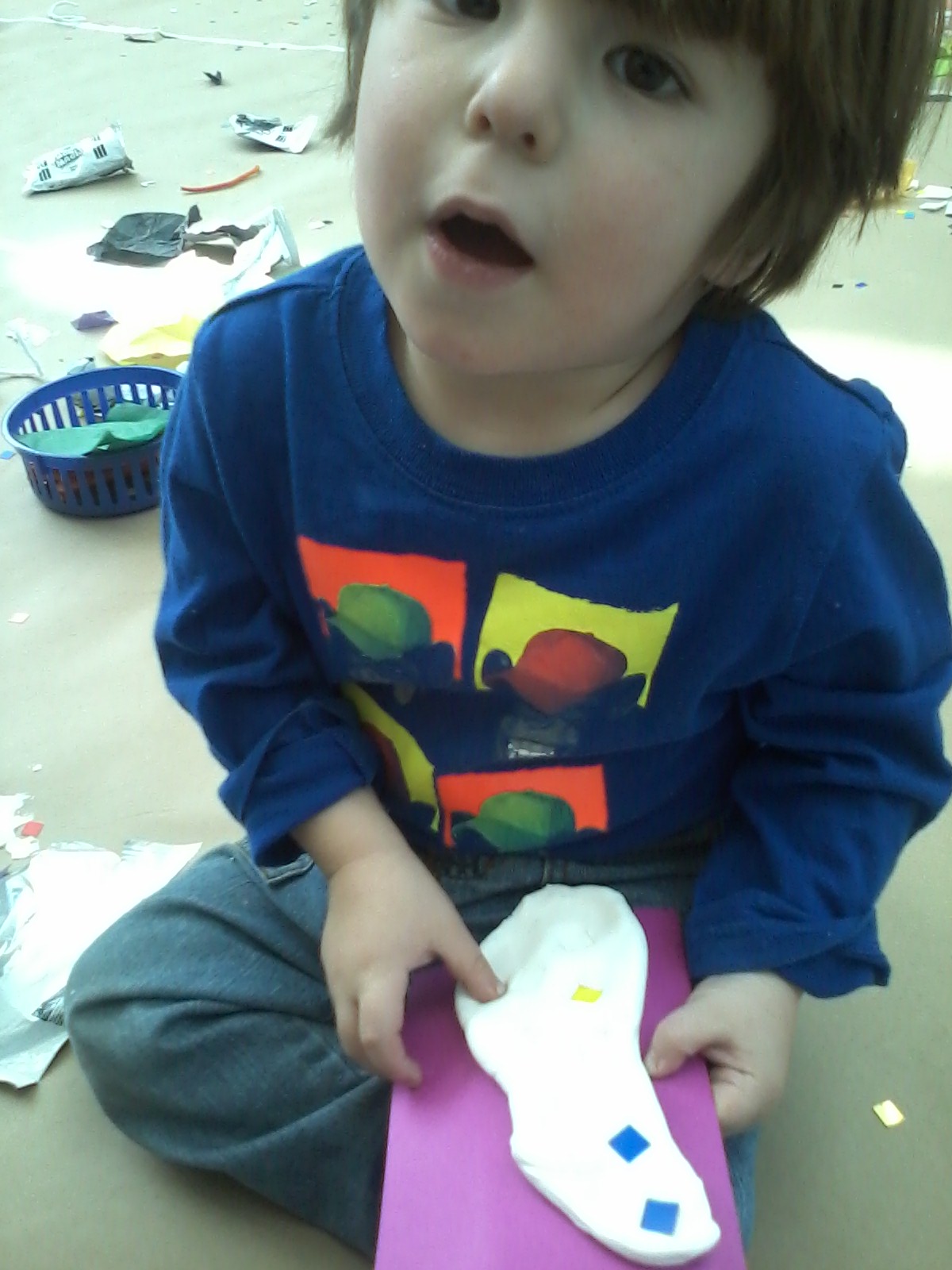 I helped Twin V make a model ship, but he was really more interested in collecting the colorful confetti pieces and organizing them into piles according to their color. (He became so obsessed with this activity that I later had to do a Google search to make sure that this was normal toddler behavior.) Despite the signs of OCD, I had to admit that this was the best craft activity we have done so far and my kids loved it, each in his own unique way.
In conclusion, I still think the MFA play dates are a worthwhile and free (!) way to get yourself and your kids to look at and appreciate art. But exactly which art – and how much you look at it – I can’t make any guarantees about. And I took a few lessons from today’s experience, mainly:
(1) Arrive on time or – even better – early
(2) Most importantly, remember what you came for: look at the art.
art, boston, massachusetts, mfa, museum