South Boston, Massachusetts – Last minute babysitter cancellation. I couldn’t really afford to not be writing today, but I had no choice.

Well, I did have a choice.
Instead of staying home and stressing out about work not getting done, I decided to take the twins on an adventure.
“What kind of adventure are we doing?” Twin V asked. When I answered that we’re going to Castle Island, his eyes widened. The twins did not know what Castle Island is, but they could tell it was something good. An island… with a castle… what’s a better adventure than that?
In reality, Castle Island is a misnomer. It’s actually a peninsula that sticks out into the Boston Harbor. And the “castle” is Fort Independence, a 19th-century granite fort that might be fun to explore, except that it is only open on weekends (and only in summer) – so not today.
Nonetheless, there was plenty of fun for the twins on Castle Island. Here’s what we liked:
Airplanes Logan Airport is just across the harbor, so airplanes were soaring directly overhead before touching down on the runway. This was very exciting for the twins, every single time it happened.
The planes flew low enough that the roar of the engine would drown out conversation for a moment, during which time Twin V was inevitably pointing out “There’s an airplane!” If I did not acknowledge this observation (either because I couldn’t hear him or because it was the ninety-ninth time he had said it) he would say “You missed it, Mom.”  Thanks, V.
Harborside Dock Hours of entertainment, from throwing rocks in the water to watching somebody fish. (If you ever wondered about the appeal of fishing, you should try watching somebody else fish. Thrilling.)
Beach It was not a hot day, and the water was frigid. But this did not stop the twins from taking off their shoes and socks and looking for crabs. When we found one, Twin V would say “He’s so cute!” and Twin S would say “Leave that crab alone. He doesn’t want to go out of the water.”
The boys got soaked, and of course I had not brought a change of clothes. I was relieved to see that my kids were not the only ones walking back to the car in T-shirts and diapers.
Lunch at Sullivan’s Famous for “snap dogs”. And also vanilla shakes. Work Shmerk. 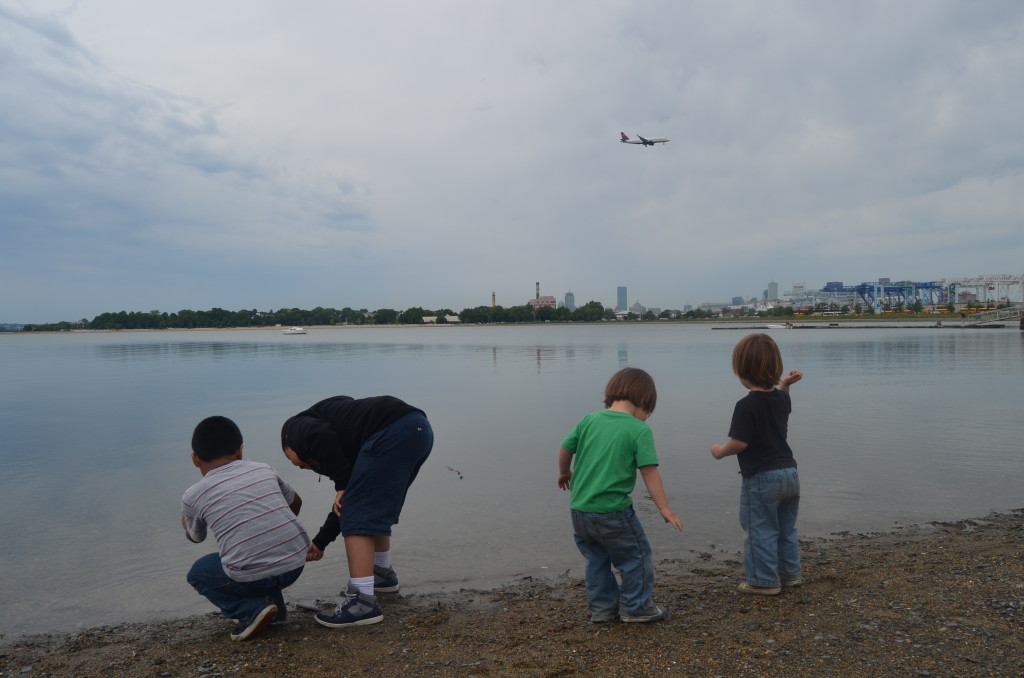