Playa Carrillo, Costa Rica – I strongly believe in the wisdom of “If it ain’t broke…” especially when it comes to kids. (Because let’s face it, it will be broke soon enough.)

That’s why we decided to return to the exact same spot on the Nicoya Peninsula that we stayed last year. Not just the same town, not just the same beach, but the exact same house (which is on the market, by the way… so if anyone is looking for a way to spend a half a million dollars, I have just the thing).
I have spent a lot of time driving to look at some lovely beaches all over the Nicoya Peninsula. But I have also spent a lot of time right here on Playa Carrillo, which may just be the loveliest of all. Last year, this sweet stretch of sand topped my list of Best Beaches for Kids in Costa Rica, thanks to the relatively small surf and the treasure-filled tidal pools. But even without twins, it’s a perfect paradise. Here’s why… 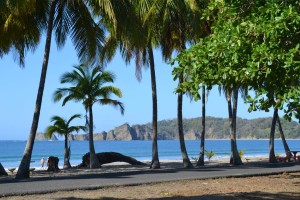 Crowds (or lack thereof) We are here in the so-called “high season” but nobody else is here. True, on weekends, Ticos descend on the beach and you might have to share the shade of your palm tree. But during the week, we have had the place to ourselves. 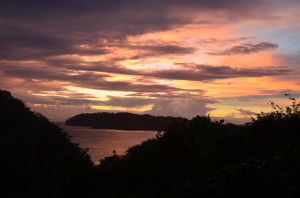 Sunsets You would think that sunsets would be a dime a dozen on the west coast of Costa Rica. But the coastline actually faces south, and there are so many nooks and crannies that sunsets are not guaranteed. But at Carrillo they are. The twins have been enjoying a nightly tradition of watching the sunset from the terrace, while Daddio makes dinner. 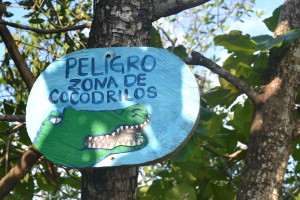 Crocodiles At the end of the beach, there is an estuary that cuts into the mangroves. Never mind that the grandparents did not see the warning signs and took the twins swimming there. Later that same day, we saw the cocodrilos first hand. And they looked hungry! (Since then, I have occasionally wished that the twins really were eaten by crocodiles, so I don’t blame the grandparents one little bit.)
beach, carrillo, costa rica