On the recommendation of our host Esteban, we decided to take the scenic route from La Fortuna to Monteverde. This involves driving around Lake Arenal all the way to the lake’s southern shore, which yields amazing views of the lake, the volcano and the surrounding mountainscape. The roads are rough, but much of the regular route to Monteverde via Tilaran is also unpaved. So–he said–it doesn’t take that much longer, and the scenery along the way is spectacular.
The trick is to program the GPS to Rio Chiquito, a village that is bypassed by the more direct route to Monteverde. The grandparents did the same, and we agreed to meet in Rio Chiquito for lunch.
For better or for worse, I also had a pretty good understanding of the route, knowing exactly when we would normally have turned away from the lake and headed toward Tilaran. Instead, Esteban advised us to continue along the lake shore and enjoy the magnificent scenery.
The first part of the drive–along the north shore of the lake–is pretty scenic in and of itself, and we had a beautiful day to take it in. The problems began at the point at which we were supposed to continue around the lake, and the GPS was inexplicably telling us to turn off toward Tilaran. When we stopped to ask, the locals sent us the way I had intuited, NOT the way the GPS had instructed to go.  So, we decided to challenge the fates and ignore the GPS.
First, we waited for the grandparents, who were somewhere behind us, to flag them down and tell them not to follow their GPS either. But they didn’t show up, and we finally lost patience and left them to their own device. Lucky for them.
We continued along the lovely lake shore through the charming village of Tronadora, and eventually the GPS “recalculated” a new route to Rio Chiquito. Everything seemed to be going swimmingly. Until we saw where she wanted us to turn. Our so-called turn-off was a narrow, overgrown, muddy track that seemed to head straight up the side of the mountain. The GPS had recalculated with a vengeance.
Daddio turned on the 4WD and we turned up. It was only 2km to the next turn, but it became less and less certain that this road led anywhere at all. Our SUV squeezed through the bushes, plowed down the overgrown plants and sloshed through mud, all the while lumbering rather unconvincingly up the hill.
After a few hundred meters, we realized that this was not a road. Maybe it was a walking trail, or even a horse trail, but it definitely was not meant for cars. Fortunately, we found a entry to a farm, which allowed just enough room to turn around, and we carefully crept back down to safety.
By now we were about 30 minutes late for our lunch date with the grandparents, but we were nowhere near our meeting point. Attempts to reach them by cell phone were unsuccessful. We finally decided to retrace our steps to Tronadora and ask for directions there. On the way, we passed a friendly group of walkers–two couples who seemed to be North American transplants. They told us exactly where to turn and what the road would be like and how long it would take to get to Rio Chiquito. Most importantly, they reassured us that it was not such an outlandish idea to drive this way. And yes, it would be beautiful.
So off we went. The road was unpaved but decent. (I mean, at least it was a road.) And even the GPS acknowledged that this was a legitimate route to Rio Chiquito.
That’s when Daddio noticed that we were running low on gas. Really low. On the steep hills and unpaved roads, the car was guzzling gas and we were down to an eighth of a tank. We held our breath and plodded forward.
As the car climbed into the mountains, every turn offered an incredible vista of the Lago Arenal, the Volcan Arenal and the endless ripple of rain forest covered hills. It was really fantastic. Daddio did not really appreciate the scenery, because he was too busy concentrating on keeping the car from toppling off the edge of the mountain and into the verdant valley below. But the twins and I were oohing and aahing at every new panorama. 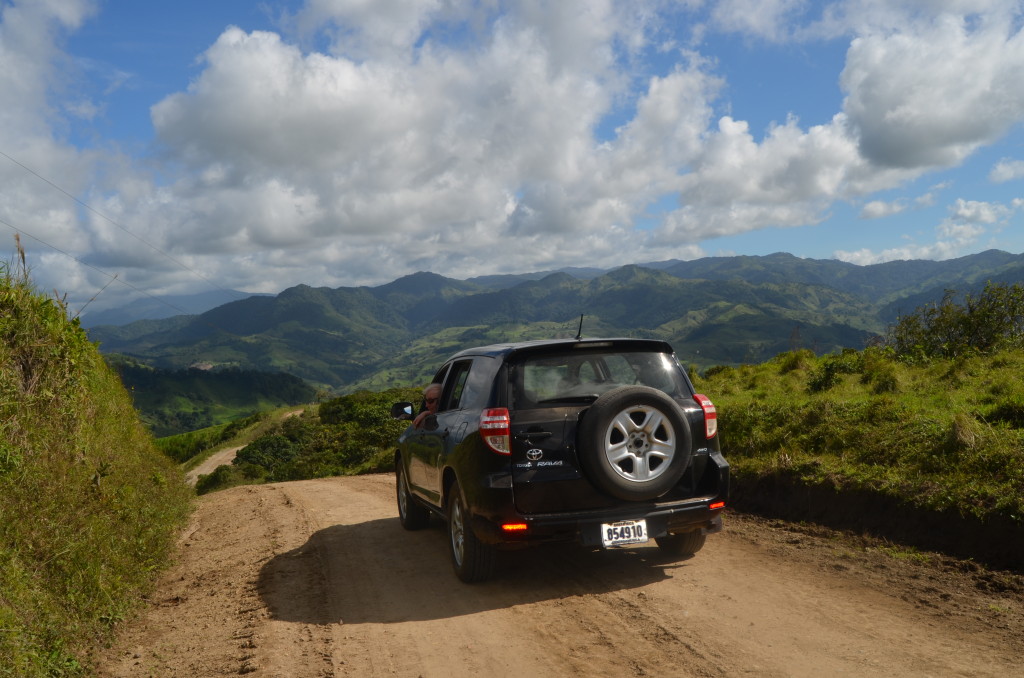 Truly, I was surprised at how much the twins enjoyed this drive. Maybe they didn’t pick up on our apprehension, or maybe they were just up for an adventure. But they did not fret, even when multiple stops and wrong turns slowed us down. Honestly, I think they liked driving up that horse trail. When things started to get a little testy, I pulled out the picnic I had packed for Rio Chiquito and we ate it in the car. This, too, they thought was part of the fun.
Upon arrival in Rio Chiquito, we were dismayed to discover that it was barely a village. There were no restaurants, no stores and no gas station. And no grandparents. An old guy sitting on his porch said that a couple in a silver car had driven through about 15 minutes earlier, but they did not stop. He also said that the nearest gas was in the next village, 7 rugged kilometers further up the mountain road. There was no filling station, just a guy selling gas out of his house.
By now, the gas light was on. Daddio was exhausted from intensive driving and anxious about running out of gas. He cursed out Esteban for recommending this route, even though there was no way Esteban could be held responsible for our crazy GPS or our lack of fuel foresight. The twins were still happy, singing Christmas carols in the back seat. We lumbered on.
And we made it. As soon as we drove into the next village, we stopped to inquire about gas. The helpful chap called his neighbor, who came out to the road to flag us down. He then sold us ten gallons from a tank on his porch. The twins finally had a chance to get out of the car and run around. And Daddio breathed a sigh of relief.
An hour later, we were pulling into the driveway of our house in Monteverde. The grandparents had arrived safe and sound. “How did it go?” I asked, in anticipation of their fretful response about precarious roads and incomprehensible navigation.
“Oh, yes, wasn’t that beautiful? Such spectacular scenery! What a wonderful recommendation to take the scenic route.” 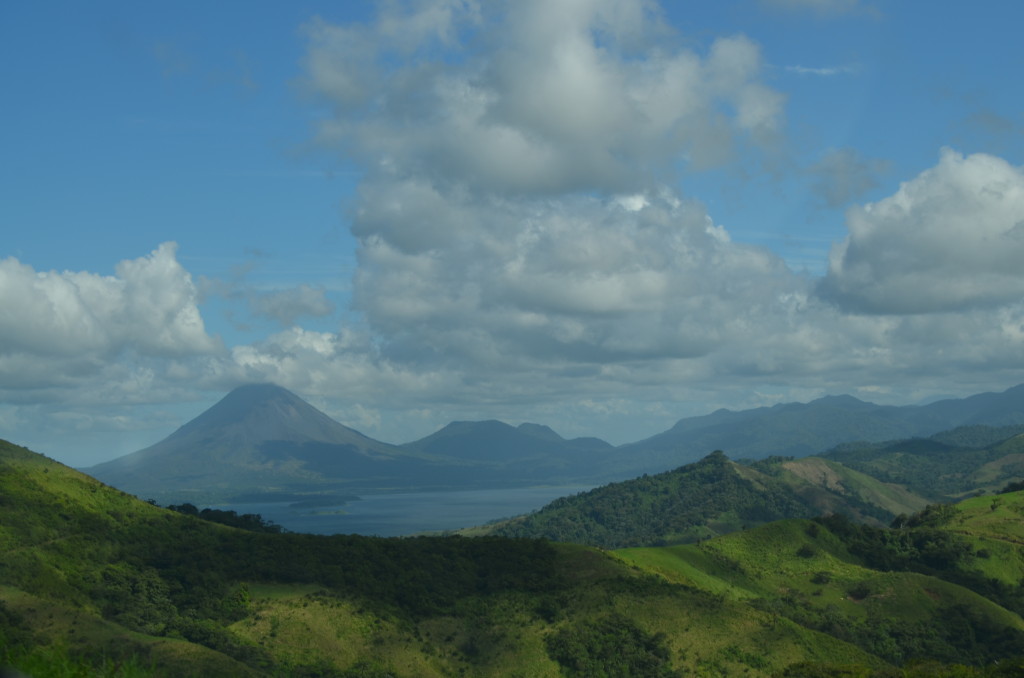