Monteverde, Costa Rica – The Bosque Eterno de los Niños, or Children’s Eternal Rainforest, started back in 1987, when a fifth-grade class in Sweden decided to raise money to protect the rainforest. They did the typical fundraisers–puppet shows, bake sales and the like–and pooled the money to buy a little piece of Costa Rica. They got some good publicity and the idea spread to the US.

Eventually, children from all over the world were working toward this common goal. To date, some 44 countries have contributed to the effort. And now, the Children’s Eternal Rainforest is an expansive 54,000 acres, making it Costa Rica’s largest private reserve. All thanks to the idealistic enthusiasm of a few kids.
Most of the Children’s Eternal Rainforest is inaccessible (as it is really being preserved for nature, not for tourists). But there is a small section with a popular hiking trail, known as the Sendero Bajo del Tigre. We are lucky enough to be staying on the edge of this gem, so we took the twins to check it out.
At the entrance, there is a lookout over the vast expanse of premontane forest, stretching to the Golfo de Nicoya. There is also a Children’s House with educational games and activities for older children (but 3-year-old twins were not interested). We did out nature walk along a small section of the trail system known as the Sendero de los Niños. Appropriately, it is the shortest circular trail, at 600m.
We were there mid-morning on a very windy day, so we didn’t expect to see much wildlife. We were greeted by a beautiful blue morpho butterfly; and Twin S spotted a quick coati as he darted across the path. But otherwise the forest was pretty quiet. 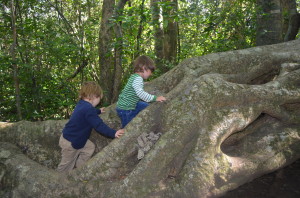 It was an uneventful hike until we happened upon a massive Strangler Fig that had toppled over onto its side. The story with the Strangler Fig is that it grows up and around a living tree, eventually killing its host. The rotting tree feeds the Strangler, which remains as a huge, hollow haven for all kinds of living creatures. Lying on its side, the Strangler was a network of tunnels and tiny rooms, begging to be explored.
Initially, the twins were tentative. But with each new discovery, they became more surefooted and more curious. Twin S was particularly adventurous. But of course, every time he tried something new, Twin V wanted to do it too. 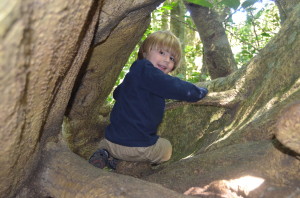 I was particularly pleased to see that they were willing to learn their limits. Twin S climbed onto the “roof” of the fallen tree and he wanted to walk the length of it. But after he wobbled and nearly lost his balance, he became more cautious. He didn’t stop going up there, but after that he stayed on all fours. 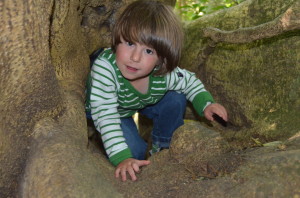 The twins climbed around on the tree for an hour or more. They wanted to stay longer, but lunchtime and naptime were nearing. (As it was, it was a looooong, slooooow walk home.) But the Strangler Fig was a truly hands-on way for them to learn about this unique rainforest species. 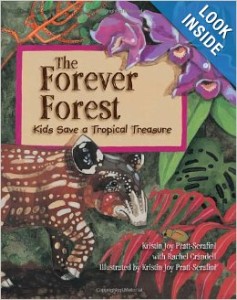 For Christmas, we picked up this book, The Forever Forest: Kids Save a Tropical Treasure, by Kristin Joy Pratt-Serafini and Rachel Crandell. A young boy, Peter, visits the Children’s Eternal Forest, meets its resident species and discovers that his mother was one of the ambitious kids who started it. The book recounts the inspiring story of the children’s efforts, as well as introducing the animals and plants of the rainforest.
The Strangler Fig is one of the featured species in this book. “Wow, thought Peter. The inside of a Strangler would be an awesome place for a hideout!” Awesome indeed.
costa rica, hiking, holidays, monteverde