Monteverde, Costa Rica – Now that the twins are old enough to understand and remember, I’m becoming more sentimental about Christmas. I grew up practicing the same traditions, year after year, at home–and I loved it. Even as a young adult, I always went home for the holidays (home being the house I grew up in).

The twins, by contrast, have had Christmas in Belize, in Costa Rica, and at the grandparents’ house in Michigan, but never in their own pink house.
But we are doing our best to create our own holiday traditions, even if they are pretty different from the ones I grew up with. Last year, I tried to start some new traditions for Nochebuena, or Christmas Eve, with a success rate of 50%. The results were surprising: the morning hike was a hit with the twins, but the evening activity–roasting marshmallows around the fire–was a bust.
This year we are celebrating Christmas in the cloud forest again. (As I previously wrote, if it ain’t broke, don’t fix it… It will be broke soon enough.) So yesterday morning, we took the twins for a wonderful hike in the Children’s Eternal Rainforest. And last night, we decided to give it another go with the marshmallows.
Roasting marshmallows on Nochebuena is a popular pastime in Costa Rica, so much that the stores sell “Chrismallows.” These sweets are just like regular marshmallows, but even less like real food (if that’s possible) as they are pink, yellow and green. The twins were delighted by this. 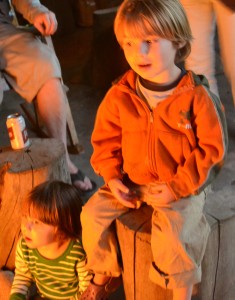 Despite last year’s holiday malfunction, I was hopeful that it would work this time. One year makes a big difference at this age. Plus, the twins had taken a decent nap in the afternoon (key to all evening activities). We also decided to forego the nice, home-cooked Christmas
Eve dinner, instead ordering pizza and eating it fireside as the sun set.  And for dessert: roasted Chrismallows.

As the evening wore on, we sat around the fire, singing Christmas carols and reminiscing about holidays past. The twins were fascinated by the fire; they enthusiastically joined in the singing; and of course they devoured the marshmallows. The grandparents remarked repeatedly that this was a lovely way to spend Christmas Eve, and I had to agree.

So, for Christmas Eve traditions, we have some keepers. Of course, next year, we might be celebrating at home, which will mean hiking in the snow and roasting marshmallows in the oven. It’s all good.
Feliz Navidad
costa rica, holidays, monteverde

One thought on “Traditions”