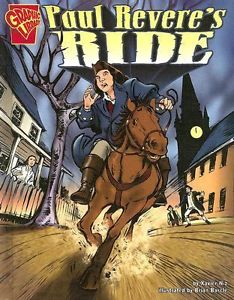 Boston, Mass – In anticipation of Patriot’s Day, I brought home a sort of comic book, Paul Revere’s Ride, by Xavier Niz and Brian Bascle. The twins are into comics these days. It’s interesting to me how they are willing to look at them and try to understand them, even when the story line is complicated. I thought it might be a good way to sneak in a little history lesson, and I was right.

Of course, a three-year-old defines all conflict in terms of who is “mean” and who is “nice.” That’s what comic books are all about, but it does not make for the most nuanced version of history. At first, I explained that the Patriots did what they had to do because they didn’t think the taxes were fair. We have been talking a lot about fairness and it seems like a good message that it’s okay to protest if something is unfair.
I’m not sure they got it. After many questions and clarifications, I finally had to admit that the British soldiers were “mean.” And then everything made sense and the twins were satisfied. 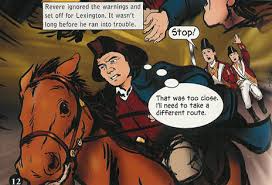 Anyway, we might as well just get a few of the facts out for now–like who is Paul Revere and what is his horse’s name–even if the bigger picture presents a rather dichotomous view of history. Hopefully, it will instill an awareness that these events took place right here, and defined what became of our country. And maybe, just maybe, it will foster enough curiosity for them to explore further. Someday.
book review, boston, history, new england, north end, revolutionary history

One thought on “History Lesson”