Moscow, Russia – Victory Day is the celebration of the Soviet victory over Nazi Germany in WWII. As in other parts of Europe–and unlike the US–Russia has living memories of this war, which saw Leningrad under siege for nearly 900 days and Nazi troops less than 50 miles from the capital. Russia still lives and breathes and remembers this war.

I think the Victory Day celebration has always included fighter planes flying over the city and tanks parading across Red Square, but I’m not sure I remember anybody paying too much attention. This year, many people were donning army caps and waving flags and wearing the Ribbon of St George to show their patriotism.

In other news, Russian lawmakers proposed a bill that would “protect” children from “unpatriotic” ideas and influences. But I digress…

We were able to watch the fly-by from our kitchen window. After that, we intended to walk up to the Novy Arbat so the twins could see the tanks rolling by on their way out of town. We did not make it in time–and in retrospect, I’m relieved. Twin V is totally obsessed with fighting and guns and blasters, the last thing we need is to feed this hawk. (We later took the twins on a grandparent-sponsored shopping spree in honor of their upcoming birthday. At the toy store, Twin S picked out a Play-Doh Sweet Shoppe Cupcake Tower, while Twin V picked out a Global Bros “Volkodav” Tank. And people wonder if we notice differences in their personalities…)

The day was capped off with fireworks, which were shot off at a half a dozen locations around the city. This was a first for the twins, who are usually asleep long before dark. But since they took a long nap in the afternoon and we didn’t have to go anywhere, they were able to stay up for the show–featuring four different displays across the city skyline. С днём победы! 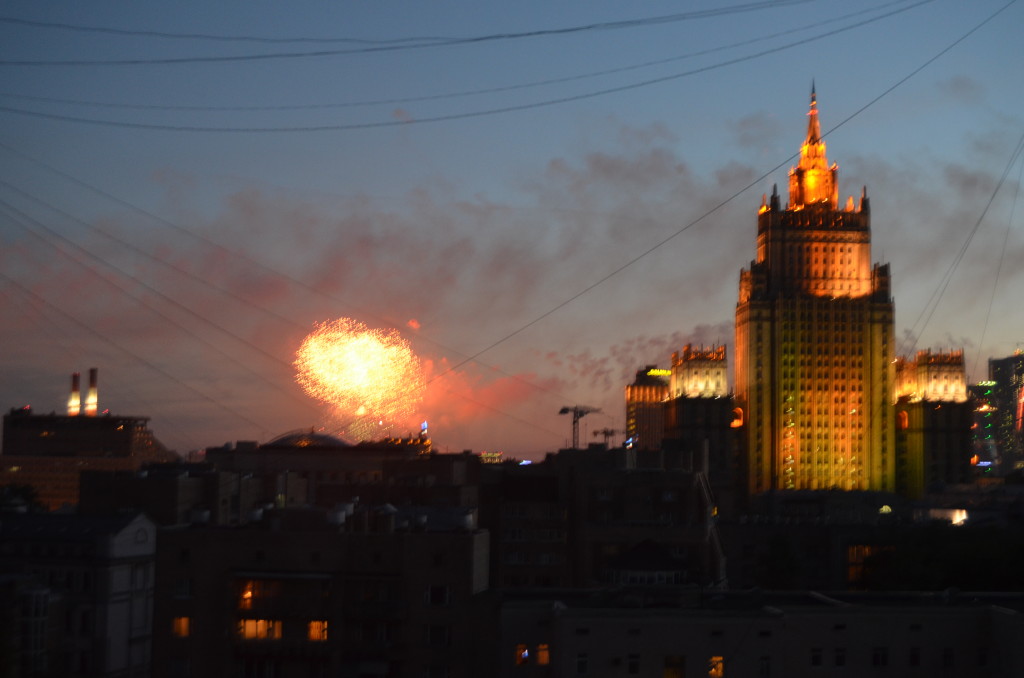