Detroit, Michigan – When the twins were two, for various reasons we spent a lot of time visiting the grandparents, including during winter months. Michigan winter gave us plenty of opportunities to explore the indoor play spaces of the East Side. Believe it or not, Eastland Mall was one of our favorites.

I spent some time at Eastland as a kid, but sadly, it now bears little resemblance to the mall of my youth. The place is pretty desolate. I couldn’t find any statistics about occupancy, but many storefronts are empty (including one of the big boxes that are supposed to “anchor” the mall). On a midweek morning, we might see a dozen or so people at the mall, but not many more.

Nonetheless, they have a small playspace which is rarely crowded (obviously), so it made for a decent bad-weather outing. I’m not sure if Twin V remembered this place, or if he just liked the sound of it, but he has been hounding me to return to “that indoor playground with pretend animals” since we arrived in Michigan last week. I was pretty sure the twins would be disappointed when we got there, as the fiberglass structures seem to be designed for smaller kids. Alas, I was wrong (again).

There were hardly any other kids there, so they could run around like crazy and climb all over the animals, vehicles and slides. I thought they would be entertained for about 10 minutes, but we were there for almost two hours of non-stop running, climbing, jumping and sliding. Twin V even made sure to tell me “I’m having a great time here.” And, they made a friend. 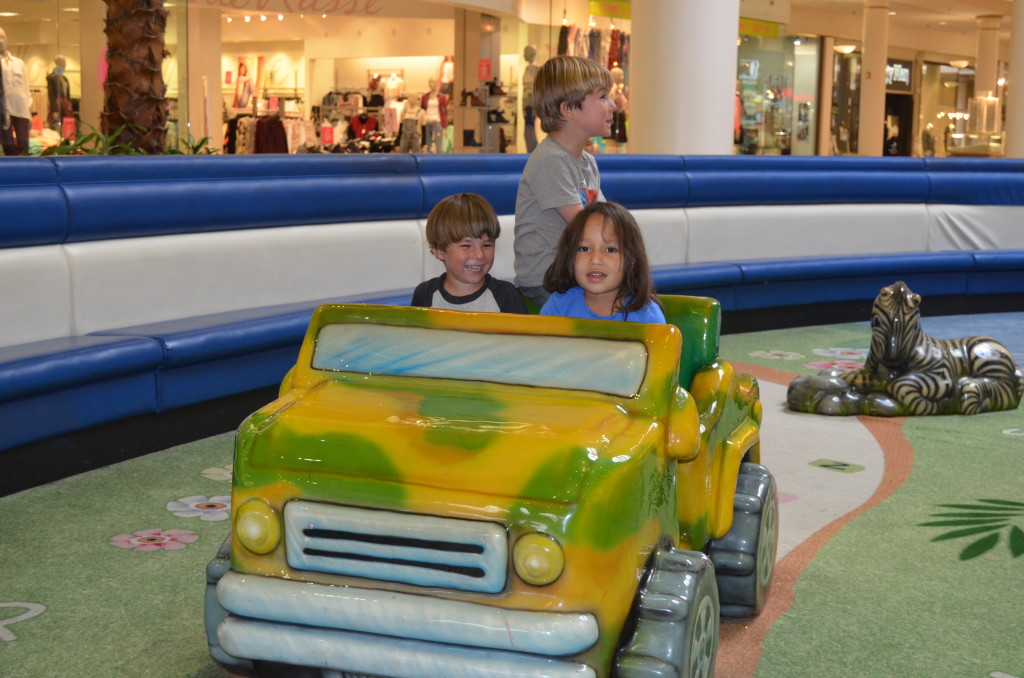 I was skeptical. But a quick Google search reveals that there was an armed robbery and shooting at Eastland as recently as November 2013 (in the middle of the day on a Saturday). It seems there were several other incidents in 2010 and 2011.

Eastland Mall was where my parents took me to see Santa Claus. It’s where I got my ears pierced. It’s where I went with my girlfriends to buy jewelry and tapes (yes, I mean cassettes). It’s where I had a summer job in high school. And now… it’s a battle turf?

Moscow, Morocco, the crime-ridden capitals of Central America… these are places I’m not afraid to take my children. But my local shopping mall…?