Ann Arbor, Michigan – I’m starting to wish that we had an older sibling in our family. Preferably a nine-year-old girl.

When we pulled out the grandparents’ Lite Brite, the twins worked on it together for about five minutes before losing interest. When I joined them, Twin S worked with me for another five minutes, while Twin V put the pegs in the potted plant. But when their nine-year-old cousin showed up, the three of them got down to business, focusing on the project at hand, working for as long as necessary, and completing a magnificent still-life of colorful ice cream sundaes. 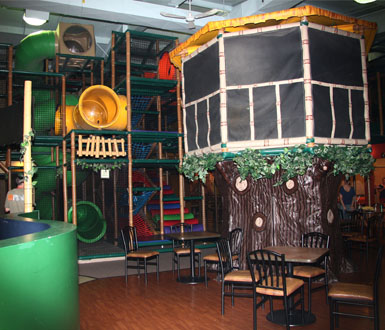 A few days later, we met my friend at Jungle Java, a giant, multi-level playscape, complete with tunnels, slides, bridges and a tree house. My friend brought her nine-year-old daughter. The three of them played for two hours, leaving me free to drink coffee and catch up with my BFF. Two hours.They did check in for a snack, but mostly they were content to play with “that green girl.”(Good with colors, not so good with names.)

So, yeah, a nine-year-old girl. I have to get one of those.