It is 60 degrees here. I’m not complaining–it’s still 50 degrees warmer than it is at home. And there is no snow–not a single flake. BUT it’s chilly and windy at the beach, so we’re spending most of our time in the heated swimming pool. (We could have done that in Somerville, right?) 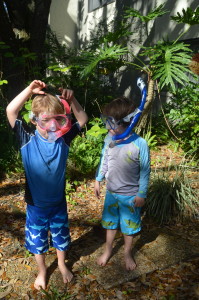 rior to coming down here, we invested in snorkel gear for the twins. This has had an amazing effect on their swimming. Suddenly, both twins are putting their faces in the water and swimming with their heads down, with no help from a noodle. This is huge. In swimming lessons this winter, both boys had been working on swimming without noodles, but the distances were short and their heads were always up out of the water, doggy-style. With masks and snorkels, they both discovered very quickly that they can swim longer, faster and stronger when they keep their faces down.

Eventually, other exercises from swim class have also become much easier, just because the boys are so much more comfortable in the water now that they are not overly concerned about keeping their heads up. So, they are jumping in, bobbing off the bottom, and treading water. Twin S has even started opening his eyes underwater without the mask on.

After years coaxing and cajoling, finally–and somehow suddenly–they can swim.

(Of course there is an underlying conflict here: for some reason Twin V wants to be next to his brother, but Twin S insists on swimming away as fast as possible. That’s about right.)

The twins usually stay in the water until their lips are blue and their skin is covered with goose bumps. It took exactly one day for them to discover the appeal of the hot tub. Initially, Twin S was so fearful of its roiling, steaming water that he wouldn’t even go near the edge. “Why do grown-ups like to go in there?” he asked. But after a few hours in the swimming pool, he was willing to dip in his toes… and gradually dangle his legs… and eventually slide in up to his neck. When it was time to go home, he was overheard remarking “This hot tub is great!”