Sarasota, Florida – As I mentioned in my previous post, Sarasota claims to be the Circus Capital of the World. (A quick Google search reveals that Peru, Indiana also claims that title, which I will not dispute, but we’re here in Sarasota.)

Starting in 1927, Sarasota was the winter home for the Ringling Bros Barnum & Bailey Circus. But long before that, the Ringling brothers (with a small b) played a critical role in the development of this town. Several of the brothers lived in the vicinity, and the Ringling family had extensive land holdings around Sarasota. One brother was a banker and several were developers and philanthropists, which is why you see the Ringling name all over town. Once John Ringling moved the circus here, Ringling Bros Barnum & Bailey became the town’s main employer, attracting clowns and acrobats from all over the country. In that way, Sarasota grew up as a circus town.

The star of this story is John Ringling, who was really the circus empire-builder in the family, as well as a founding father Sarasota. At one time, he was also one of the richest men in the world. Funny how those things go, though. He lost much of his fortune during the Great Depression. He also lost the confidence of his business partners, and he was forced to give up control of his circus enterprise. In 1936, he died with $311 in his bank account.

He was practically broke, but he still had most of his stuff. He still had Ca d’Zan, his elaborate Venetian-style palazzo overlooking Sarasota Bay. He still had his collection of Baroque art, which he shared with the public at his own 21-gallery Museum of Art. And he still had his vast estate. When he died, he bequeathed it all to the state of Florida.

Nowadays, Florida State University manages the site as The Ringling, an amazing facility that includes the Circus Museum, the Museum of Art, the Ca d’Zan, and the historic Asolo Theater, not to mention acres and acres of lovingly landscaped grounds and gardens. Plus, one of the few playgrounds in the municipality of Sarasota (from what I can tell). 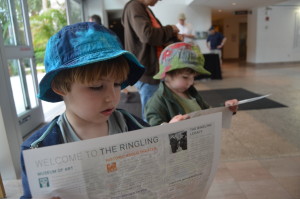 So, we obviously went there. Several times. In fact, the grandparents liked it so much that they bought a membership. Then they brought the twins there. Then the twins brought me there. Here they are, studying their maps, so they could show me around.

There’s a lot to do at the Ringling, but we spent most of our time at the Circus Museum (and of course the playground). Here’s what is awesome about it: 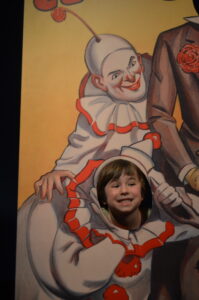 The Original Circus Museum Featuring costumes and props from over the years, including a real human cannon, as well as the railroad car that John and Mable Ringling used to travel around on. (It’s about the size of our house.)

Circus Interactives Super fun hands-on (feet-on, full body-on) exhibits, like a clown car to squeeze into, a miniature human cannon to launch, and a tight rope to walk. Twin V spent a full 30 minutes watching a video to learn how a clown–Toby “Circus-is-my-middle-name” Ballantine–put on his make-up. He came home saying he wanted to be a clown for Halloween. (A few days later, we met Toby Circus Ballantine when we went to Circus Sarasota. The kids were star struck.)

Howard Bros Circus Model This is an 11,000-square-foot miniature version of circus city, including the trains, the animals, the prep tents, the warm-up space, the midway and, finally, the big top. For boys that love to set up “scenes”, this is heaven.

So… I’m now taking bets. How long until one of these boys runs off to join the circus?

2 thoughts on “The Ringling”