Somerville, Mass – One year ago today, we were on our way to Moscow. We had many adventures, and one outcome was the new, just-released Moscow City Guide, excerpted here… 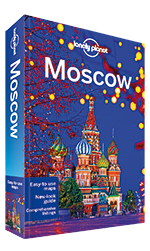 An excerpt from the Lonely Planet Moscow City Guide

Filled with icons and onion domes, the Russian capital might not seem like an appealing destination for kids, but you’d be surprised. in Moscow, little people will find museums, parks, theaters and even restaurants that cater especially to them.

Most sights and museums offer reduced-rate tickets for children up to 12 or 18 years of age. Kids younger than five are often free of charge. Look out for family tickets.

Art Museums The Pushkin Museum of Fine Arts and the Museum of Decorative & Folk Art both have educational centres that allow kids aged five to 13 years to create their own art. Garage Museum of Contemporary Art also has programs for kids.

Moscow Planetarium The planetarium has interactive exhibits taht allow kids to perform science experiments, taste freeze-dried space food and run around on the surface of the moon.

Central Museum of the Armed Forces You might not let your children play with guns, but how about climbing around on tanks, trucks and missiles?

Experimentarium A place for children to discover for themselves the answer to the endless “Why?”

Soviet Arcade Games Museum Find out what it was like to be a kid in the Soviet Union. 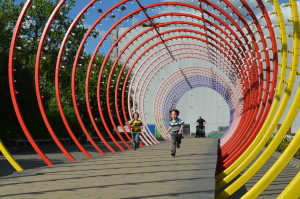 Even in winter, there are plenty of chances to get outside for fresh air and exercise.

Parks With over 100 parks and gardens, Moscow has plenty of space for kids to let off steam–many parks include playgrounds. Larger spaces such as Gorky Park, Vorobyovy Gory Nature Preserve and Izmaylovsky Park rent bicycles, paddle boats and such.

River Cruises Most little ones love a boat ride. It’s also the perfect way for kids to see the city’s historic sights, as there’s no need to fight the crowds or linger too long in one place.

Moscow Zoo Even toddlers will get a kick out of the detsky zoopark (children’s zoo), with close-up encounters with their favorite animals.

Many restaurants host “children’s parties” on Saturday and Sunday afternoons, offering toys, games, entertainment and supervision for kids while their parents chow down. 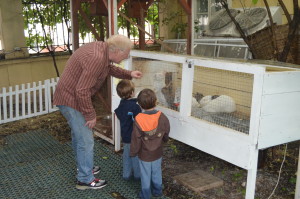 Diners Classics such as Starlite Diner are family favourites, especially on weekends.

Play Areas Restaurants such as Anderson for Pop and Cafe Schisliva have dedicated play areas for children. At Elardzhi, kids frolic in the courtyard with playground and petting zoo.

Little ones have never had such a range of entertainment choices.

Puppet Theatre Kids will see hundreds of puppets at the Obraztsov Puppet Museum, then see them come to life at the attached theatre. 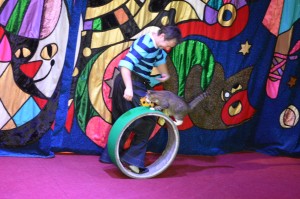 Animal Theatre Kuklachev’s cats and Durov’s animals put on a good show for kids of all ages.

Circus The acrobatics will astound and amaze, while clowns and animal tricks will leave them laughing. Choose between two acclaimed circuses: Bolshoi Circus on Vernadskogo and Nikulin Circus on Tsvetnoy Bulvar.

The metro might be fun for kids, but be careful during rush hour, when trains and platforms are packed. Detskoe Taxi will look out for your kids and offers smoke-free cars and child seats upon request.

Buy the book at Lonely Planet…