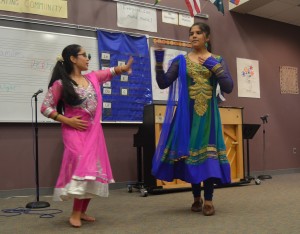 Somerville, Mass – Question: When is going to school like a trip around the world? Answer: When it’s Heritage Night

This event was organized by the PTA and the arts council at the twins’ school. The tag line was “Sharing Cultures, Building Community.” This is a school where the kids speak some 27 different languages at home. With this kind of diversity, sharing cultures MUST be a part of building community. How else are we going to understand each other? The evening was designed to give kids and their families a chance to share the food, music, dance, stories and other traditions from their more than 50 countries of origin.

Our own heritage is so distant and diluted, that I didn’t feel we had much to offer at this event. The twins’ ancestors immigrated from various Northern European countries, but that was ages ago. Neither Daddio nor I grew up with any traditions from the old countries. But that is what makes this type of interaction all the more valuable for our children, who need to see that other families might eat different things, wear different kinds of clothes, and listen to different kinds of music than we do. We went to Heritage Night to learn about and appreciate these differences.

Upon arrival, the kids all received Heritage Night “passports”. Their job was to get stamps and stickers in their passports by performing various tasks around the school. These were pretty simple assignments, like putting a sticker on the map of the world to show where their ancestors came from, or identifying a flag of a foreign country, or learning a word in a foreign language. The twins were not initially interested in these activities, but they were soon won over by stickers. 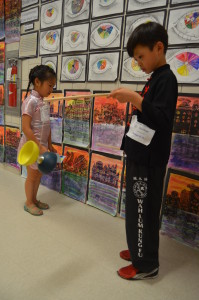 They could also get a stamp by watching some of the student cultural performances. We saw Gaelic songs played on the Irish tin whistle, tricks with a Chinese yo-yo, stories recounted from El Salvador and Peru and Nepali dance. At the same time, there were grown-ups offering salsa dancing lessons and henna tattoos. And, the 8th graders had put together an Immigration Museum, with exhibits that they designed in their social studies classes.

And of course, there was food–all provided by the families. We ate Columbian arepas, Central Asian lamb and rice pilaf, Italian (-American) lasagna and Korean kimbap. The twins–amazingly–gobbled down most of this unfamiliar food.

The evening ended with a concert, in which the school’s two choruses sang songs from around the world. Unfortunately this was well past my guys’ witching hour, so we couldn’t stay.

But it was quite impressive, and the twins managed to get eight stamps in their passports — more than most people get in their whole life! 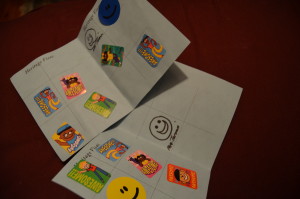