Somerville, Mass – So what do we do for fun when we’re not traveling? We read about traveling!

This review of the Magic Tree House series is not going to be a revelation to anybody who knows much about children’s literature. Mary Pope Osborne has amassed legions of fans since she started writing the series back in 1992. Now up to 54 books, the series has been translated into 32 languages and has sold some 100 million copies. The books are super engaging and highly educational — and they offer many of the same benefits of travel itself.

For those who are not familiar with the series, Jack and Annie are a brother-sister duo who find a magic tree house filled with books in the woods near their house. The magic, they discover, is that they can travel through space and time to visit the settings of the books. So each story finds Jack and Annie traveling to a new place and period in history, from the late Cretaceous period (65 million years ago) in Dinosaurs Before Dark, to the year 2031 (35 years into their future) in Midnight on the Moon. They travel the world from Imperial China to the Wild West. Each adventure involves some precarious situations, some problem solving and some new friends. There’s enough action to keep the twins’ attention over the course of 10 chapters, and enough education so that we all usually learn something new.

One thing that I appreciate about the series is the author’s willingness to suspend her disbelief (and ours) about folklore, religion and mythology. When Jack and Annie travel to Ancient Egypt, they help Queen Hutepi (a mummy!) find her Book of the Dead, so she can pass on to her afterlife. When they go to Ancient Greece, they are rescued by the winged horse Pegasus. Jack and Annie learn about the legends by living them — and so do the readers.

Here is something else to love about the Magic Tree House. There’s no movie (unless you happen to live in Japan), no TV show, no action figures, no dolls, no nothing. There’s just books. If you want more, there are non-fiction companion books, offering more information about the themes in each story. Mary Pope Osborne has refused to commercialize her characters and stories, because she just wants children to read more books.

Shortly after we commenced reading the MTH books, Twin V bemoaned “I wish we had a Magic Tree House like that.”

Sorry, kid, I know that’s not what you meant, but learn to love it. 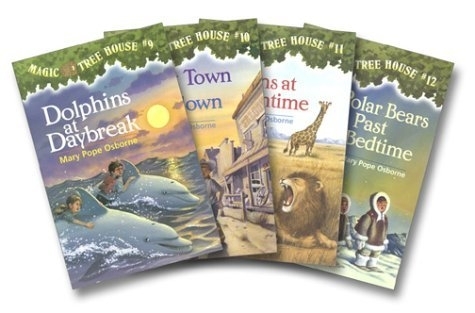