North Adams, Mass – After an inauspicious start to our Father’s Day weekend extravaganza, we had nowhere to go but up. And I mean that both figuratively and literally.

On day two, we got an early start and headed straight for Mount Greylock, the highest peak in Massachusetts (3489 ft).  At the suggestion of the helpful woman working in Bascom Lodge, at the summit, we decided to hike the Overlook Trail, a 2.6-mile loop around the summit. The hike did not offer quite as many “overlooks” as I expected, but it had its highlights.

One was the fact that there was trail race organized by the Western Mass Athletic Club that was taking place while we hiked. We had the trail to ourselves for the first half, but then the runners started hurtling through. At first I was concerned because we had to pay attention and get everyone out of their way. But the twins thought this was a blast, as they stood to the side, giving high-fives, cheering (and occasionally heckling) the runners as they passed. Then, as soon as the coast was clear, the boys would take off after them, running as fast as they could, trying to keep up, until eventually the runners faded into the trees. And then the next group would come trundling up behind us, and the episode would repeat.

It should not be a surprise, I suppose, that the race injected new life into my little competitors. We had already endured one meltdown over who would go first and effectively lead our expedition, so I was not really interested in having them race against each other. (I know from experience that there is no happy ending to that ongoing feud.) But the essentially unwinnable race against the outsiders was just what the guys needed to revive their flagging energy.

We found out later that some of the runners were doing a 5K, while others would run a half-marathon that morning. We were all inspired and promised each other to run a trail race (some day!). 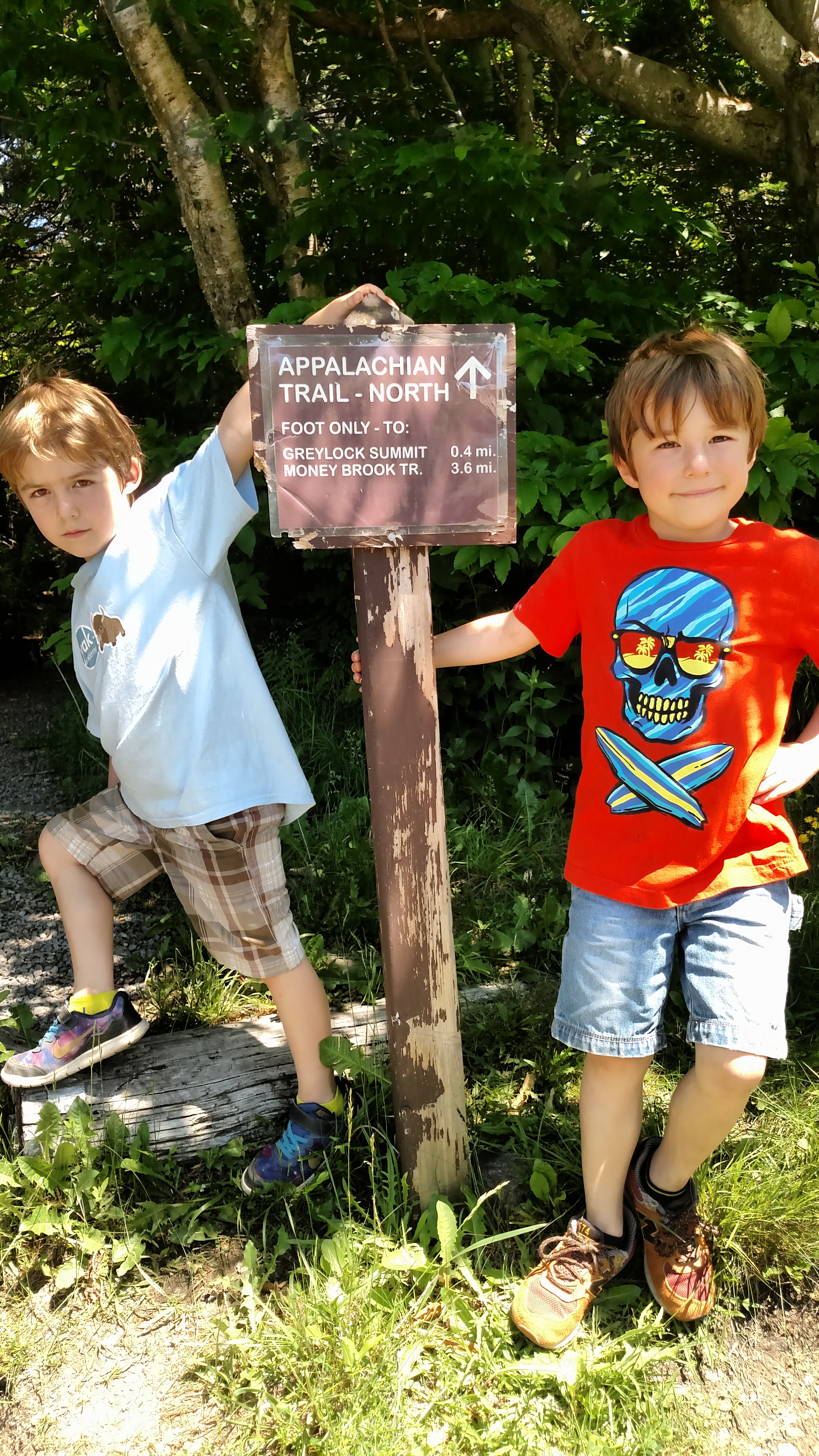 The second highlight came toward the end of our journey, when we looped back toward the summit along a portion of the Appalachian Trail. I found out later that this part of the trail is categorized as `Strenuous’, which certainly would have scared us off if I knew that ahead of time. But the boys were troopers, stopping for water and snacks, but marching ever forward. It’s remarkable how the twin who complains about walking a few city blocks and lags endlessly behind, is also the one who leads the way with unflagging enthusiasm when we were out on the trails. You go, Twin S!

So the twins learned about the AT, the storied National Scenic Trail, which traverses 14 states and 2179 miles. (I like to remind folks that four of those states and 734 of those miles are in New England!) So… we probably did less than a mile. But still, we all got a little thrill from spotting the trail marker and we promised each other to hike the AT–or at least part of it (some day!).

The “overlooks”–lacking on the trail–more than made up for it back at the summit. We were disappointed to discover that the War Memorial Tower is being repaired and is therefore closed to climbers. But even without the tower, the summit offers a pretty amazing view of five states (including Vermont and New Hampshire to the north, and as far as Connecticut and New York in the south).

Topped off with delicious homemade ice cream sandwiches from Bascom Lodge, Mount Greylock made for some happy hikers. 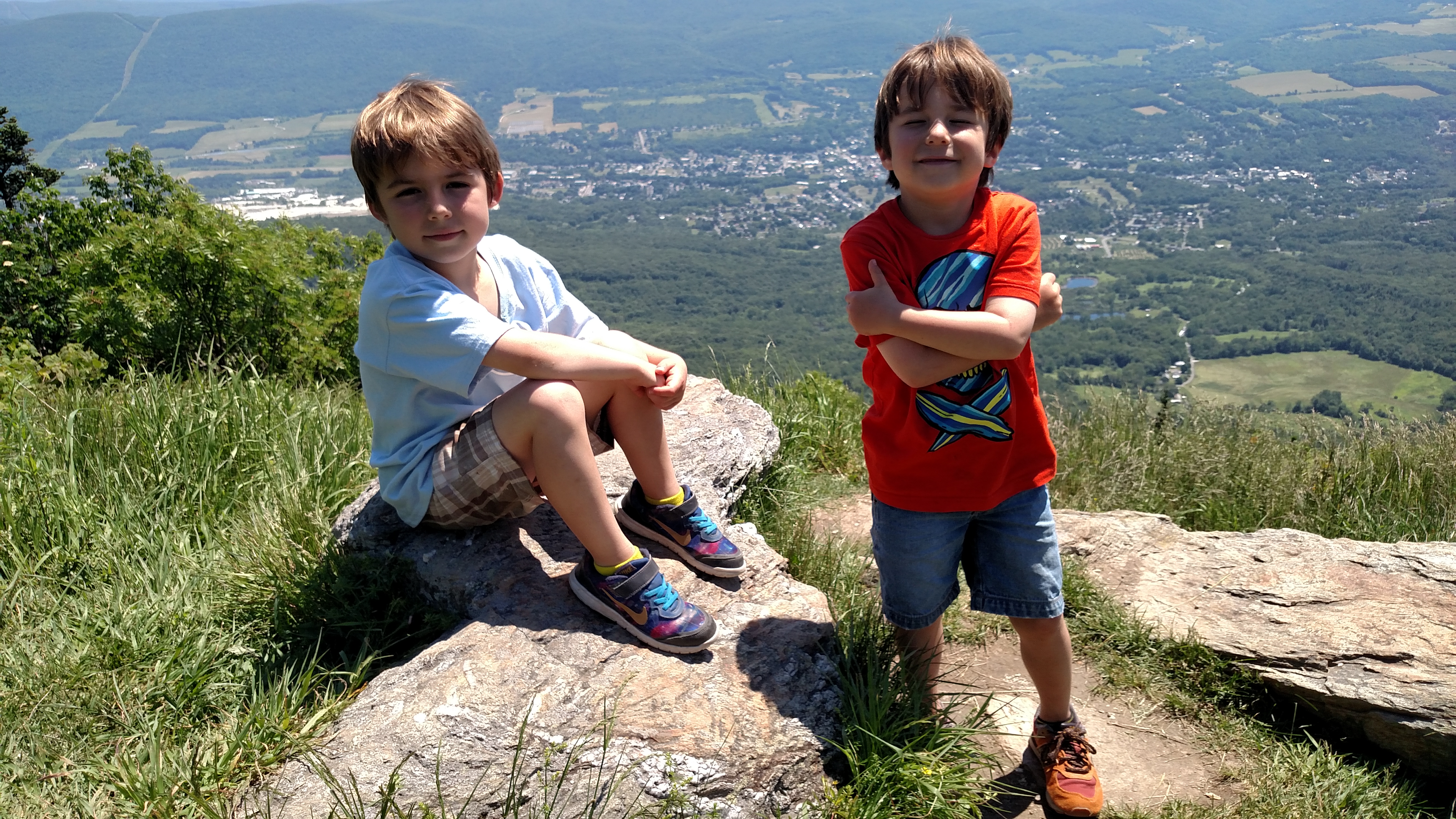 Five-state view from the summit of Mount Greylock

One thought on “Mount Greylock”