Saco, Maine – For the second year, we have returned to a “family camp” at Ferry Beach. (Find out what it’s all about here.)

The twins have had an incredible week–singing, dancing, swimming, creating, exploring, making new friends and having new adventures. Still, the highlight–which they have been looking forward to all week–is the annual game of Humans vs. Zombies. 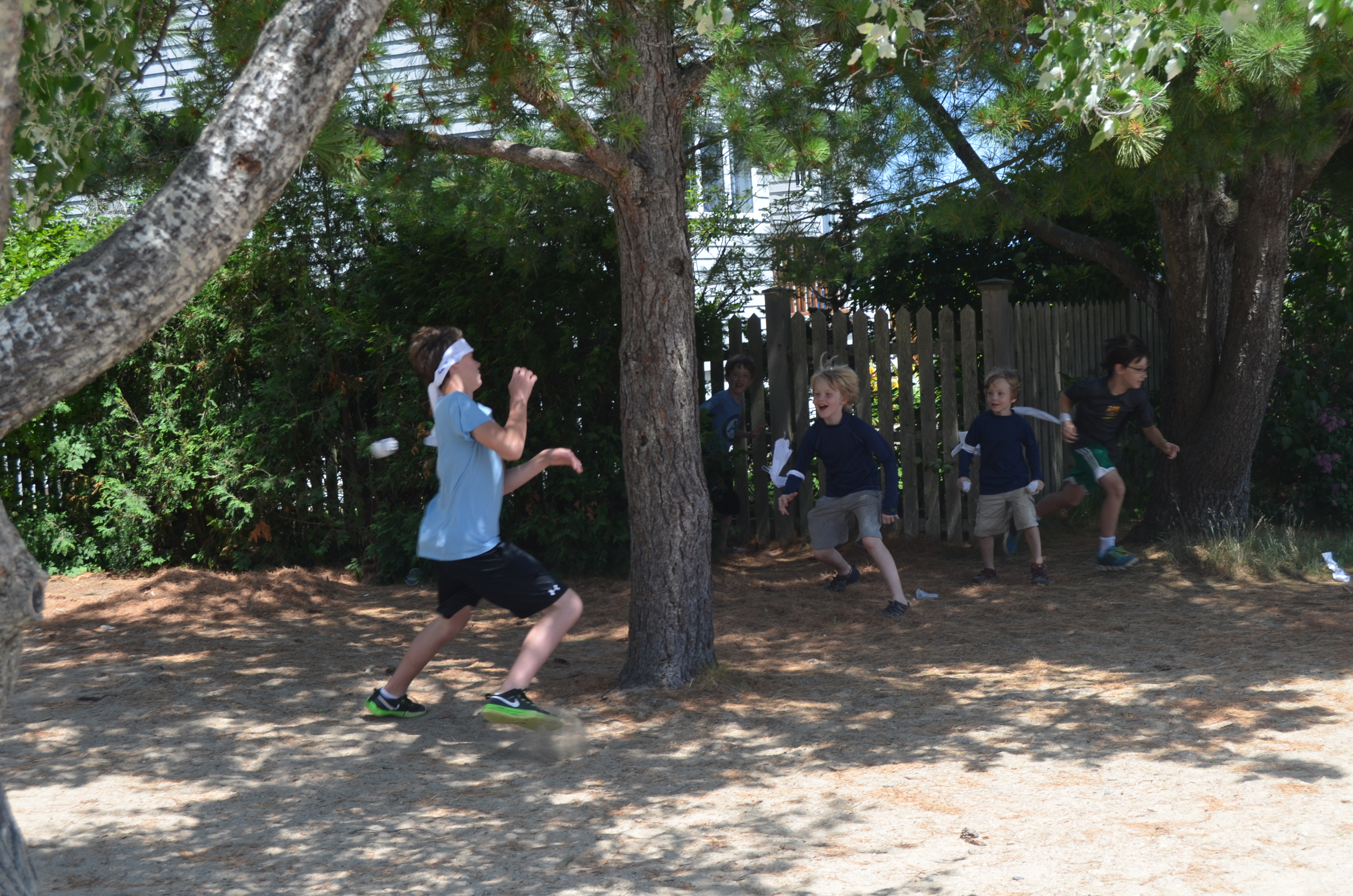 This is how different two twins can be:

Before the game started, Twin V declared that it’s more fun to be a zombie. At first I watched him as he was running away and throwing socks to repel the zombies coming after him, so I think he gave it his best effort. But it didn’t take too long before he had been tagged. And the next I saw him, he was hanging out with his zombie gang, plotting a take-over of the humans’ hideout. He was having a blast.

Meanwhile, Twin S had no intention of getting tagged. I was acting as a border guard to make sure all the kids stayed within the boundaries. Throughout the 90-minute game, Twin S turned up frequently, playing it safe, skirting the edges of the playing field and making good use of various hiding places. He was hanging by himself (mostly). His pockets were stuffed with socks (zombie repellents) but he never got close enough to a zombie to throw them. I wasn’t sure if he was having fun: he seemed lonely and stressed out.

With about 10 minutes to go, the zombies started celebrating their victory, declaring they had captured all the humans. But I happened to know there were still three humans left–one of which was Twin S. To win the game, the humans had to somehow make their way to the top of the playground structure (now overrun with zombies) to get “rescued”. Virtually impossible. When they made their move, two got caught, but Twin S somehow–miraculously–managed to escape.

And when the bell went off signalling the end of the game, he was the sole remaining human. S did not manage to make it to the top of the playground structure to get rescued, but he was the only human that did not get caught, thanks to his risk-averse strategy.

After the game ended, I finally found Twin S hiding under a porch, crying. “I lost the game,” he sobbed. He was devastated.

I was faced with a dilemma. I have been reading Brave Parenting, by Krissy Pozatek. The philosophy is that as parents, we need to let our children experience their difficult emotions–their disappointment, frustration, anger and sadness–so they learn how to deal with them. If we always try to fix things and make our children feel better, they will be less resourceful and less resilient when they have to face adversity throughout their life (as they will).

So here was a perfect opportunity to put this philosophy into practice. I recognized that it was normal for S to feel disappointed about losing the game. He’s going to lose many games in his life, so learning to deal with that disappointment is an important skill. According to Pozatek’s book, I should let him voice his sadness, mirror his emotions back to him, but refrain from trying to comfort him.

This was very, very difficult. I felt like Twin S had achieved a pretty significant accomplishment by holding out as long as he did. He didn’t win, but Twin S did not understand that it’s practically impossible to win. Nobody wins except the zombies. I wanted S to realize this–to recognize his accomplishment (and the game) for what it was.

So, I balked. I let him voice his sadness. I mirrored his emotions back to him. But then I comforted him. I reminded him that he had lasted longer as a human than any other kid, which was a pretty cool thing too.

S recovered. As we walked across the camp, he received some congratulations from various parents, though not from the kids, all of whom recognized that he did not win. Nonetheless, he started to feel pretty good about himself.

A few minutes later, Twin S approached a small group of pre-teen boys who were rehashing the game. S casually chimed in “Yeah, I was the last surviving human…”

The pre-teens were unimpressed, but they were super nice about it. (Mixed-age friendships: one of the greatest things about Ferry Beach.)

I ushered my son along, to let the older boys get back to their conversation. S rolled his eyes at me and gave a knowing look to his friends. “We’ll talk later…” he said with a confident nod of his head.

I’m still not sure I did the right thing. Certainly Pozatek would argue that I “rescued” S from his emotions, missing out on a chance to let him develop this important life skill. And she would probably be right. But in this case, I couldn’t let my heartbroken kid continue to suffer.

Fortunately, S is going to lose plenty of games in his life, so I’m pretty sure he will have many more opportunities to pick up this skill. In the meantime, he was the sole surviving human on the entire planet. For now, he’s going to need that little confidence boost.