Old Orchard Beach, Maine – We have been making this semi-annual trek up to Ferry Beach for a few years now. But it was only recently that I realized where we were: about three miles from kid heaven–the amazing, honky-tonk, happy place called Palace Playland. This old-school amusement park stretches out for four acres along Old Orchard Beach, offering rides, games, fortune tellers, an arcade, a fun house, a giant slide, Dodg’em cars, hot dogs, ice cream, fried dough and more. When I say “old-school,” I mean it: the place has been here since 1902. It’s classic.

We drove by last fall, when the place was shut down for the season. The rickety old roller coaster loomed in the rain, and the ferris wheel was still and silent. I felt a twinge of nostalgia, a longing for summer (and for my long-past childhood, when I could ride the Tilt-a-Whirl without getting sick). I promised the twins we would come back.

So here we were, about nine months later, on the hottest day of the summer (or so it seemed). The twins were cranky and tired, after a week packed with activities at camp. Daddio was on his way to meet us, but his train was delayed due to the heat. The nostalgia was nowhere to be found.  I was busy dreading the queuing, which would be unbearable in 96 degrees. Plus, I was afraid the twins would not be tall enough to ride most of the rides, which would lead to disappointment all around.

Also, we had just booked the last available hotel room in Portland, which was ridiculously expensive. I really wanted to call off the Palace Playland plan and go straight to the hotel pool to get our money’s worth.

The twins would not hear of it. 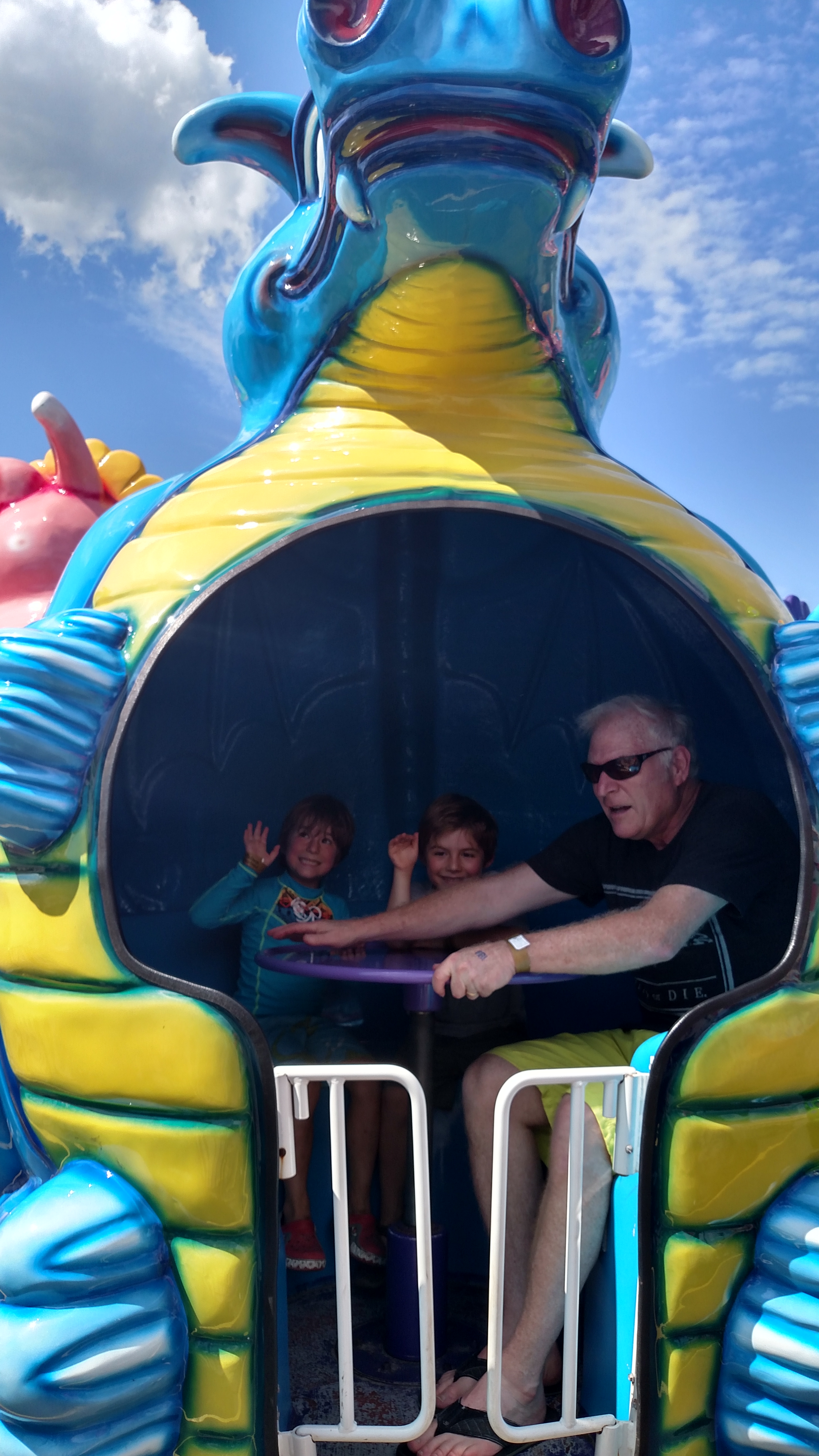 Alas, my worst fears were not realized. The park was practically empty, as the crowds had wisely sought relief from the heat at the beach. The twins cleared the 42-inch minimum with one and three inches to spare, respectively. And we were free and clear to whoop it up on the dozens of rides.

When the twins were three, we went to Canobie Lake Park, which was fun, even though they were recovering from pneumonia (!). When they were four, we went to Busch Gardens, which was kind of a bust because it was pouring rain (although I heard they had a great time when they went back with the grandparents a few days later). In both of those cases, the twins went exclusively on the kiddie rides; and it was good.

But now that they are fearless six-year-olds, the twins have no interest in kiddie rides. We quickly graduated to the “Family Rides,” such as the Electra Wheel (ferris wheel) and the Cascade Falls, which was great for a cool-off. And once the twins got a taste of the coasters and thrill rides, there was no going back. Galaxy Coaster, Matterhorn, Riptide, Pirate–any ride with a 42-inch minimum, they were on it.

Twin V, after riding the roller coaster: “Mom, when we go down those big hills, do you get a little tickle in your tummy?”

Daddio and I recalled a previous trip to Portland (before twins), when we had stayed as far away as possible from the noise and crowds of Old Orchard Beach. But under these new circumstances, with kids in tow, I was like a kid myself. I rode the Galaxy Coaster and Riptide. I road “no hands” with arms extended overhead. I screamed. Then I did it all over again.

But I stayed far, far away from the Tilt-a-Whirl. Nostalgia only goes so far. 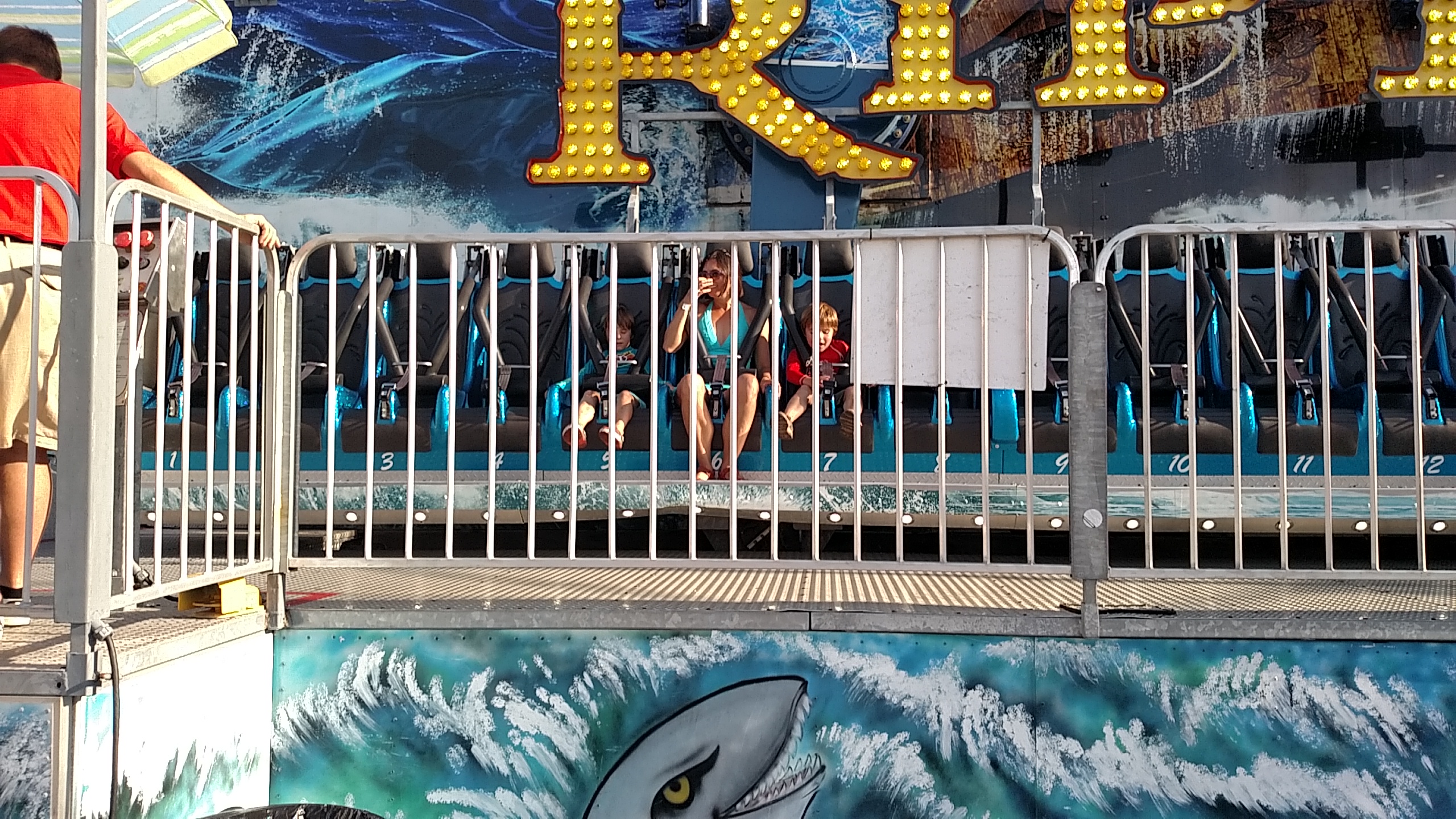 One thought on “Palace Playland”