Gilford, New Hampshire – I have written in the past about Surviving Winter and the importance of embracing winter activities. (As I reread that post, I remember that we used to take skating lessons. Yeah… that didn’t really work out. But the point is still valid: find something to love about winter.) In my on-going quest to find a winter activity that we love — besides heading to warmer climes — I decided to take the twins skiing. I have always noted that skiers seem to love winter… maybe the twins will be skiers!

Ironically, it was Daddio’s birthday weekend and Daddio is not a skier. But he is a good sport, so he went along with this plan. His only condition was that we go to a ski resort that also offers mountain tubing, which is how we ended up at Gunstock Mountain Resort. 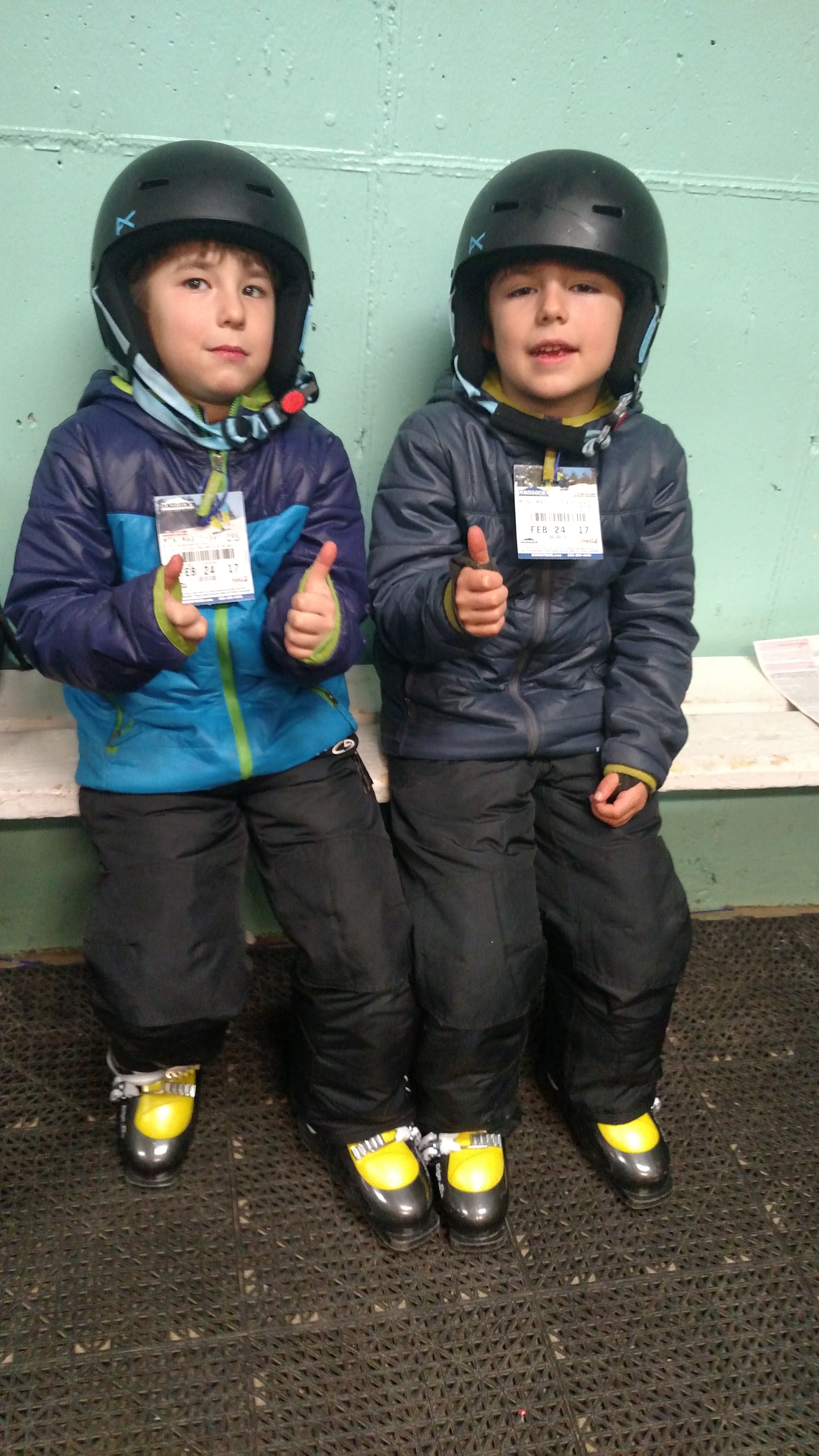 Gunstock bills itself as a family-friendly ski resort, and it lives up to the claim. “First Time Ever” packages include lessons, gear rental and lift tickets for a very decent price — especially if you go for the three-lesson deal (which we did not). There’s a good selection of green “easy” ski trails. And not only is there snow tubing, but there’s also a Mountain Coaster, which is sort of like a roller coaster built into the side of the mountain. So, we figured, even if the skiing was a bust, we had a back-up plan.

The skiing got off to a very slow start. The filling-out of forms and the trying-on of equipment, the figuring-out of where we’re supposed to be and the figuring-out how to get there (now that we have skis on)… it nearly did us in before we even started. But, we finally made it to the bottom of the bunny hill, where a very kindly instructor took charge of my already frustrated twins. Bless his soul.

Daddio and I took turns supervising the lesson (at the instructor’s request, since the twins were brand-new skiers), while the other skied on nearby hills. The boys got comfortable on their skis. They learned to ride (and dismount) the magic carpet. And eventually they (sort of) learned to weave in and out of the orange cones on their way down. 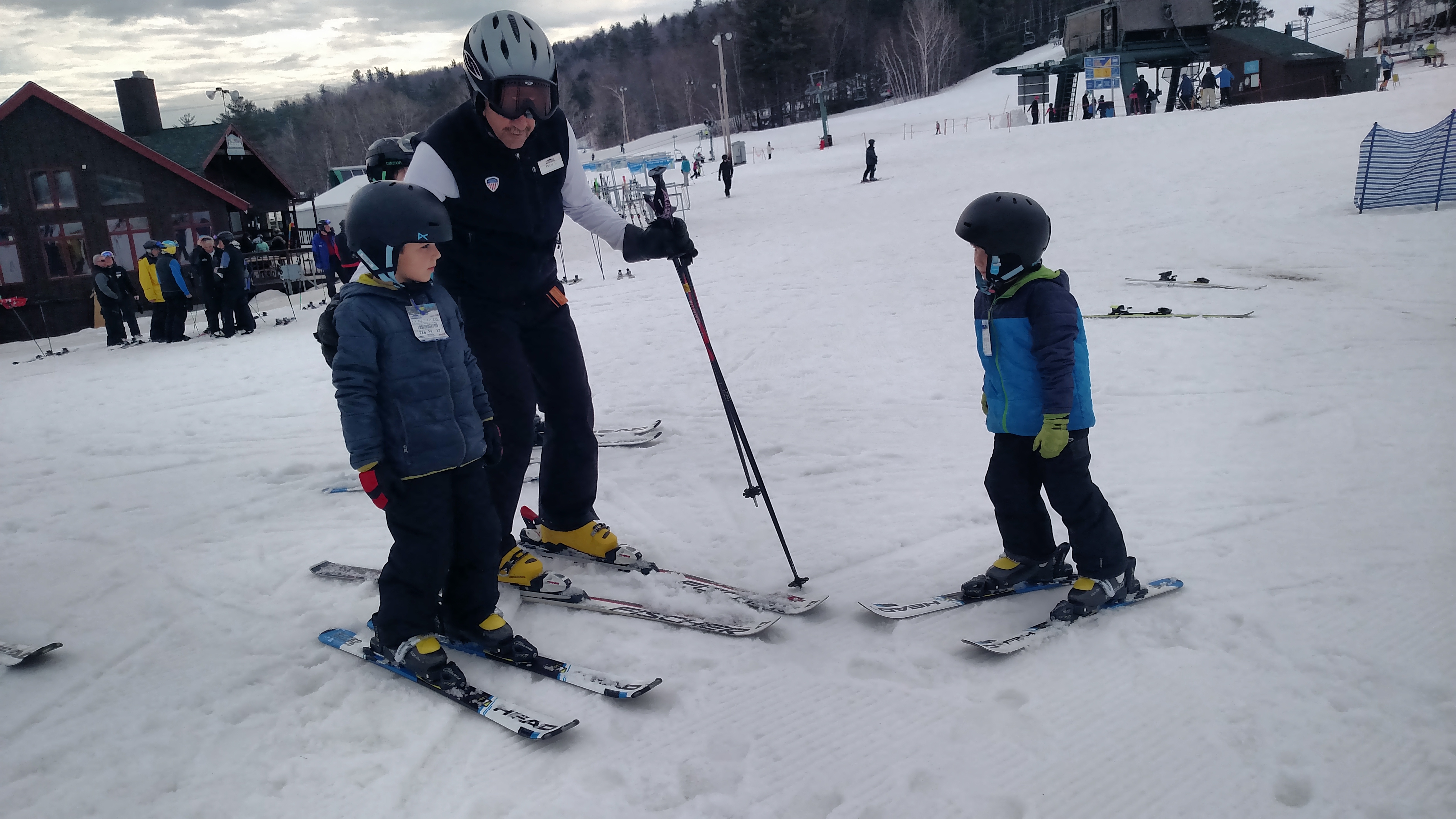 The mountain emptied at Gunstock Mountain Resort. At least I think it did. Basically, a cloud wrapped itself around the mountain and we couldn’t really see more than five feet in front, let alone the whole mountain.

Honestly, the kids were not complaining too much, but it was miserable. I think I was the most uncomfortable because I didn’t have a hat. And, I was feeling pretty dumb about paying lots of money for a family shower. We needed to regroup. So finally, about three-quarters of the way through the kids’ lesson, we bailed.

Over lunch, nothing but fog was visible from the windows of the cafeteria. We let our outer wear dry out. I was trying to dry our gloves under the hand dryer in the bathroom, and some lovely person from the janitorial staff offered to put them in the clothes dryer. (Now that’s service!) We drank hot coffee and hot cocoa as appropriate. And we debated going back to the hotel, an idea much favored by Twin S.

But while we were sitting there, lo and behold, the sky cleared and the sun came out. Suddenly, it was beautiful weather for skiing and the mountain was practically empty. 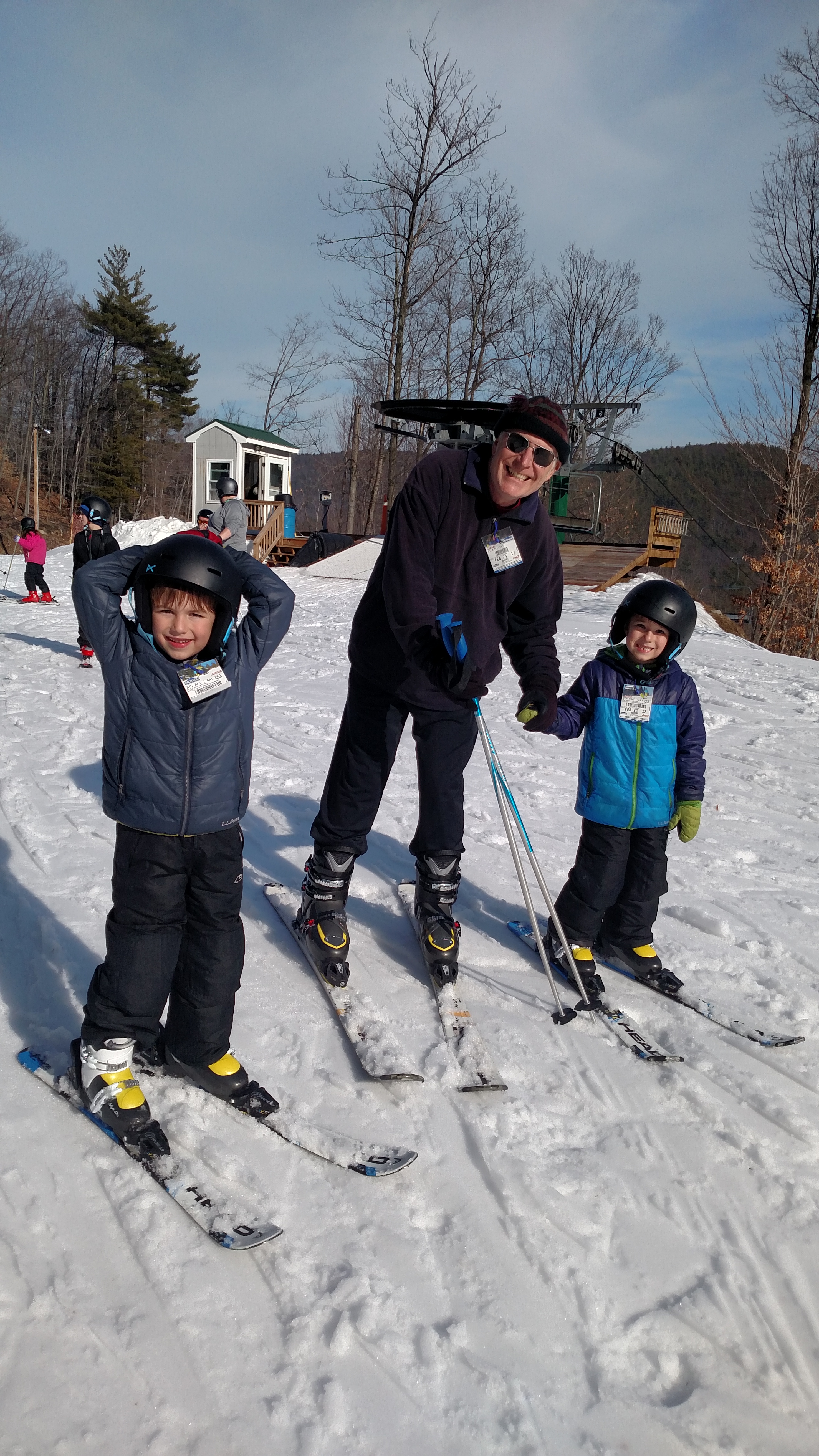 So we headed back out. The boys were bored of the bunny hill, so they convinced us to take them on the chair lift up to some of the easy trails. It was a little premature, but we had to go along or lose our audience.

It was probably not that pretty to watch, but we had a great time… slipping, sliding, sledding and yes, even skiing down those trails. The twins felt a real sense of accomplishment from riding the chairlift and skiing on the “real” trails. And they liked it enough to demand that “we should go skiing more often.”

So maybe we will. Maybe they will be skiers…