Somerville, MA – I wrote a story for the religious education class that I teach for four- and five-year-olds at my Unitarian-Universalist church. It’s the story of Bree Newsome, the woman who climbed the flag pole and took down the Confederate flag at the South Carolina state house. The story is about civil disobedience and bravery and freedom.

Our religious education class uses stories and play to teach children about Unitarian-Universalist  principles and sources. In this case, the story exemplifies two of the UU principles: #5 the right of conscience and the use of democratic process; and #6 the goal of world community with peace, liberty and justice for all. (Or, in kids’ words, “All people need a voice” and “Build a fair and peaceful world.”)

The teacher does not read the story, but rather reenacts it with figurines and felt cut-outs. This allows the children (mostly non-readers) to re-discover the stories on their own if they want to play with them later. All stories include “wondering questions” to encourage the children to think about the meaning of the story and make the connections to UU values. And with that explanation, here is the story… 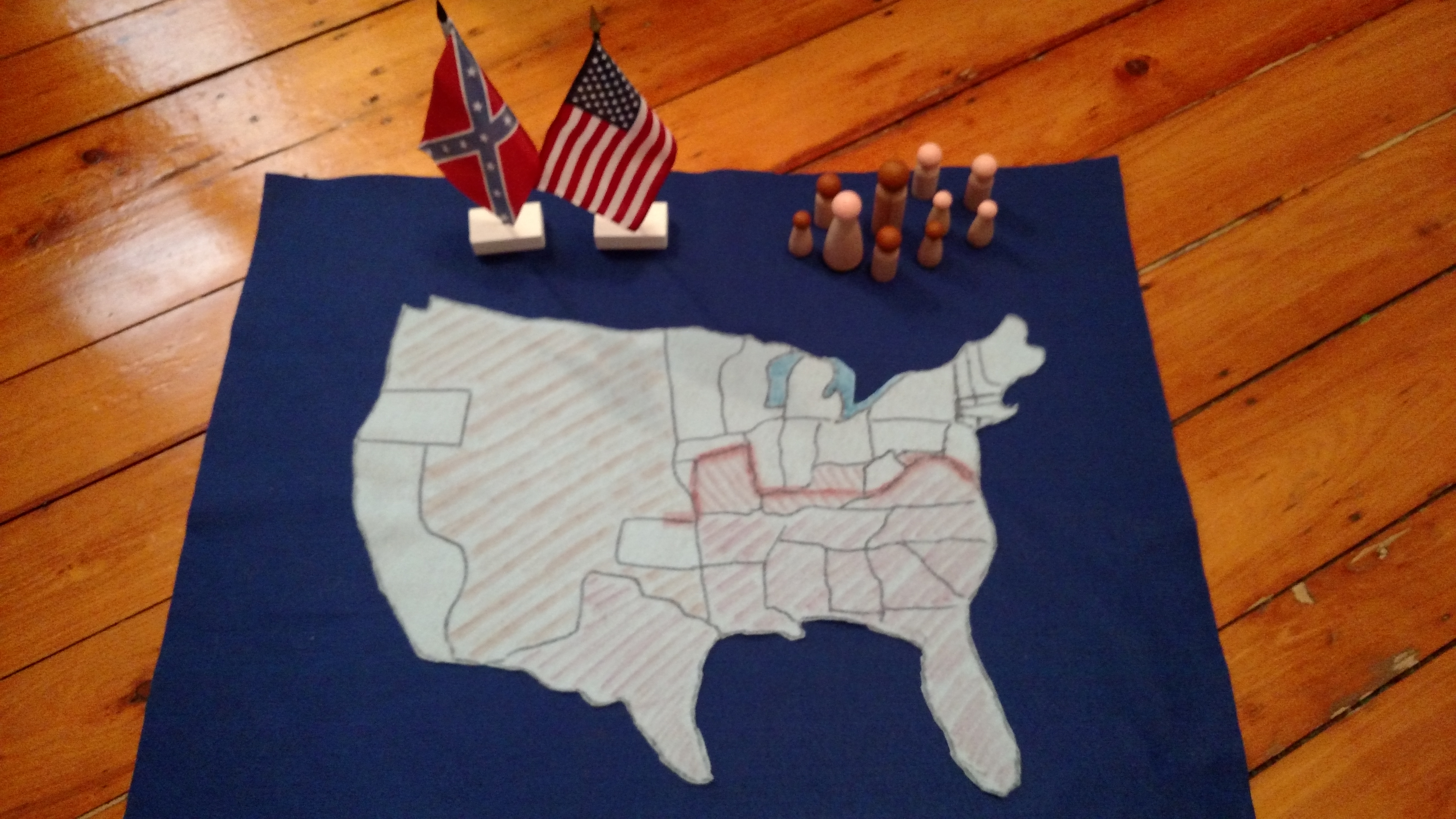 Today we’re going to hear a story about a woman who did something very brave.

This is a map of our country.

A long time ago, in the southern part of our country, there were a lot of big farms called plantations. These are the plantation owners. They owned the farms and made money from the crops.

It was hard work to grow those crops. Nowadays, farmers have machines that do that work. But back then, who did all that hard work?

The slaves knew that this was not fair. Some of them tried to escape. They ran away to the North, where it was a little bit safer for them. Other people also knew it wasn’t fair. Some people helped the slaves escape. Some people called abolitionists were trying to change the laws of the country to make slavery illegal.

But the plantation owners did not want to give up their slaves. They started a war about this. People in the south fought against the people in the north.

The south was the Confederacy. They wanted to make their own separate country where they could continue to keep people as slaves. This is the flag that the Confederacy used during the war.

It’s called the Civil War, because people in the same country were fighting against each other. The Confederacy lost the war. Our country stayed together – united.

The slaves were free. Now they had the right to leave the plantations and to get paid for their work. Eventually, they got the right to go to school and vote.

Some of the people in the south were mad because they lost the war. Others were mad because they didn’t think the brown and black people should have the same rights as them. They remembered the time of slavery as good times, because other people were doing their work for them. They continued to fly this flag – the Confederate flag – because it reminded them of the good times.

Now, in some places in the south, some people were still flying this Confederate flag. This flag is a symbol of a mean system, where people were not treated fairly, but this flag was flying at important government buildings.

But they wouldn’t take the flag down. They put it on a high flagpole with a lock. And people were mad. Not just brown people, but lots of people, who recognized that the flag was a mean symbol. They shouted about it, and wrote articles and sang angry songs and spoke poems, but the flag stayed up.

Finally, a brave woman named Bree Newsome got her climbing gear, and her tools and her helmet. Her friends helped her. She climbed to the top of the pole and cut down the flag.

Lots of people were watching and they cheered! Other people were mad. They were so mad, they told the police to arrest her. But most people thought she was a hero. And they helped to get her out of jail, because they knew she didn’t do anything wrong. She did something very brave.

Soon, people started noticing that there were Confederate flags flying in many places, and that they should be come down too. Bree Newsome started traveling around to tell everyone why she did it.  She said “I did it because I am free.”

if you have ever heard any parts of this story before.

Which of our Promises this story reminds you of.

Why one country had two different flags.

Why a flag is important.

If you have ever done anything brave. 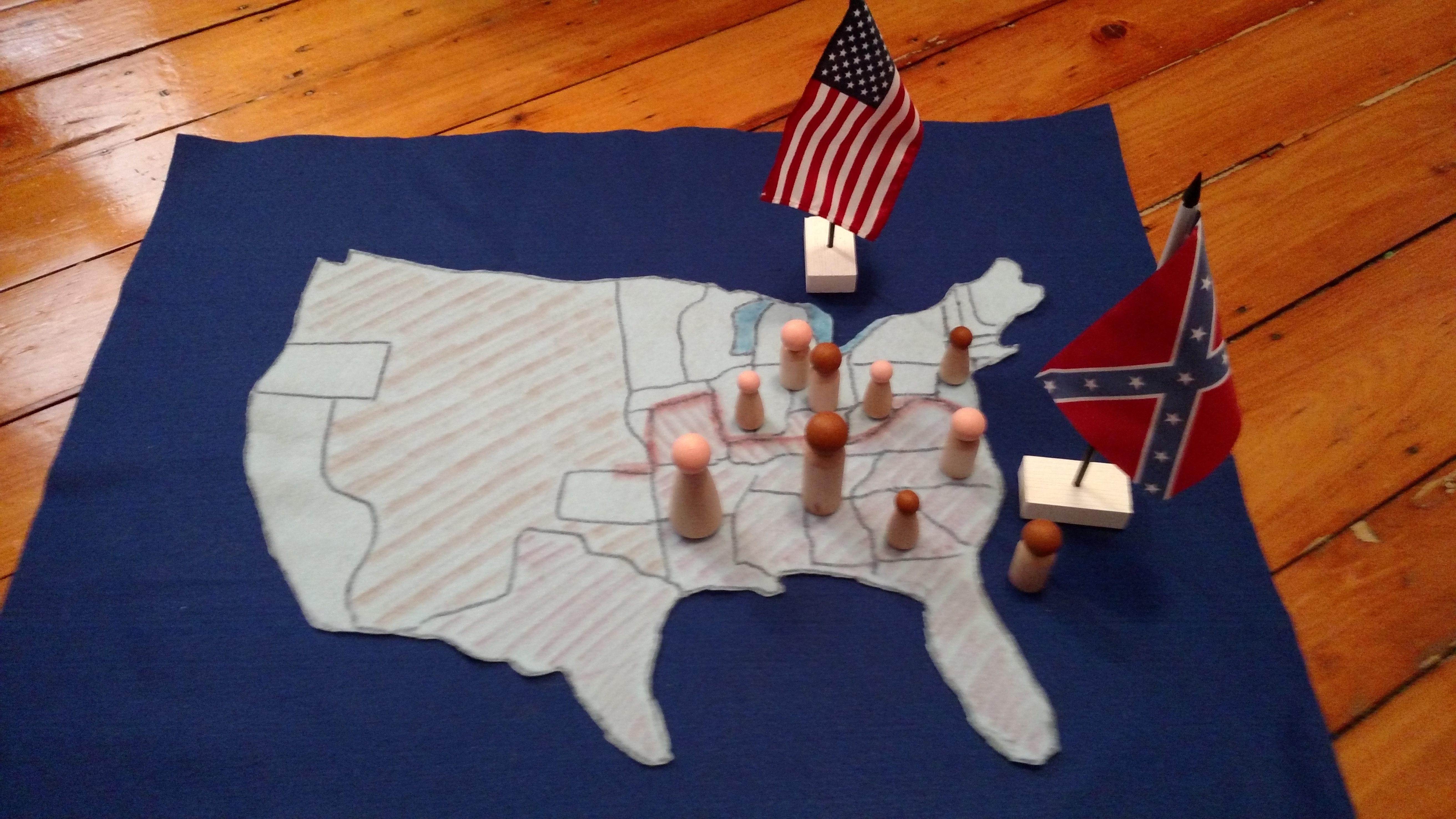