Somerville, Mass – I always liked the TV show Dinosaur Train, but my kids never really got on board with it. In fact, they were always ambivalent about the whole dinosaur thing. I mean, they liked examining the skeletons at the Museum of Science and the American Museum of Natural History. But I think it was mostly interesting because they were skeletons–you know, monsters–not dinosaurs.

But this year, Twin S is learning about dinos at school, and his long-held interest in archaeology has expanded to paleontology. He has started spouting fun facts about the ancient creatures. For example, flying reptiles (like pterodactyls) and marine reptiles (like ophthalmosaurus) are not considered dinosaurs. They were pterosaurs and ichthyosaurs, respectively. There you go: proof that kids make you smarter.

And now… how to encourage my budding paleontologist?

Twin S asked to borrow a spade. A short while later, he came in from the backyard looking very dejected, declaring that he couldn’t find a single dinosaur bone back there. (The yard was covered with snow and the ground was frozen solid–never mind the other reasons he might not find any dinosaur bones back there.) That’s when I decided to pull out this excavation kit that we had been saving for a rainy (or snowy) day. 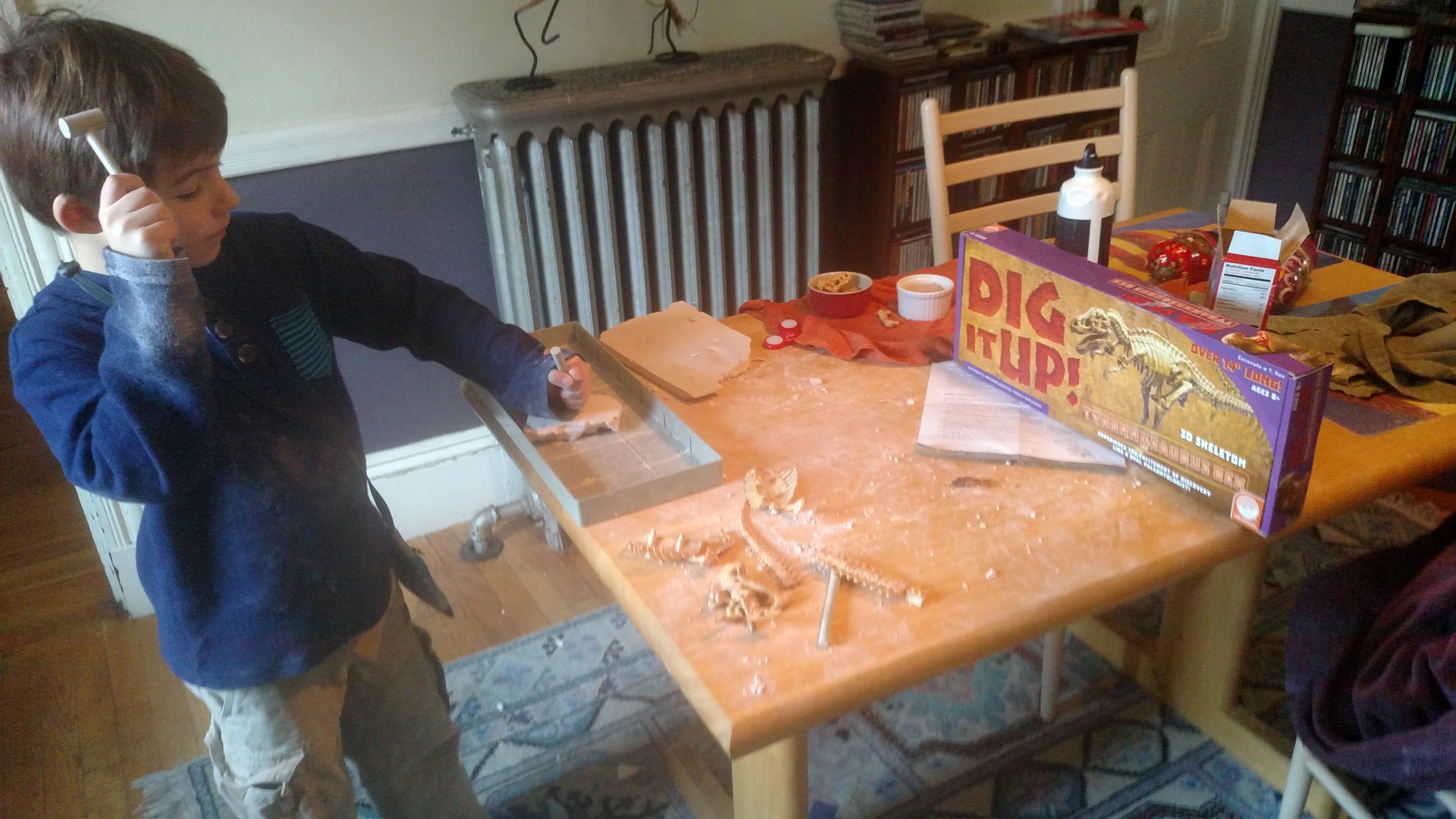 S digs up the bones of a T-rex

This was a fantastic project. The kit is recommended for kids aged 8 and up, but S, age 7, completed it mostly by himself. His brother helped with the digging, which was not difficult but was sometimes tedious. S was able to put the bones together himself, then I helped click them into place.

I like an activity that can hold a kid’s attention for a solid chunk of time, ie, longer than it takes me to set up and supervise. This one was perfect, as it occupied several hours on both days of our weekend. (It would be easy enough to condense this activity into one afternoon, though S welcomed the breaks from the digging.)

The end result is a sturdy plastic model of a T-Rex (or triceratops) skeleton, which is pretty awesome. Other excavation kits contain real fossils, which is also cool. Best of all, the kids get a small taste of the work of a paleontologist–both the tedium of the search and the thrill of discovery.

The twins received this gorgeous book for Christmas (thanks to a comp copy from Lonely Planet) — just in time for S, who was about to discover his passion for paleontology. It is packed with interesting information in bite-size portions. Every page shows off colorful illustrations and cool photographs, many featuring scientists at work. The format invites browsing, as opposed to sustained reading. But there is a lot to look at and learn and S keeps coming back to it. 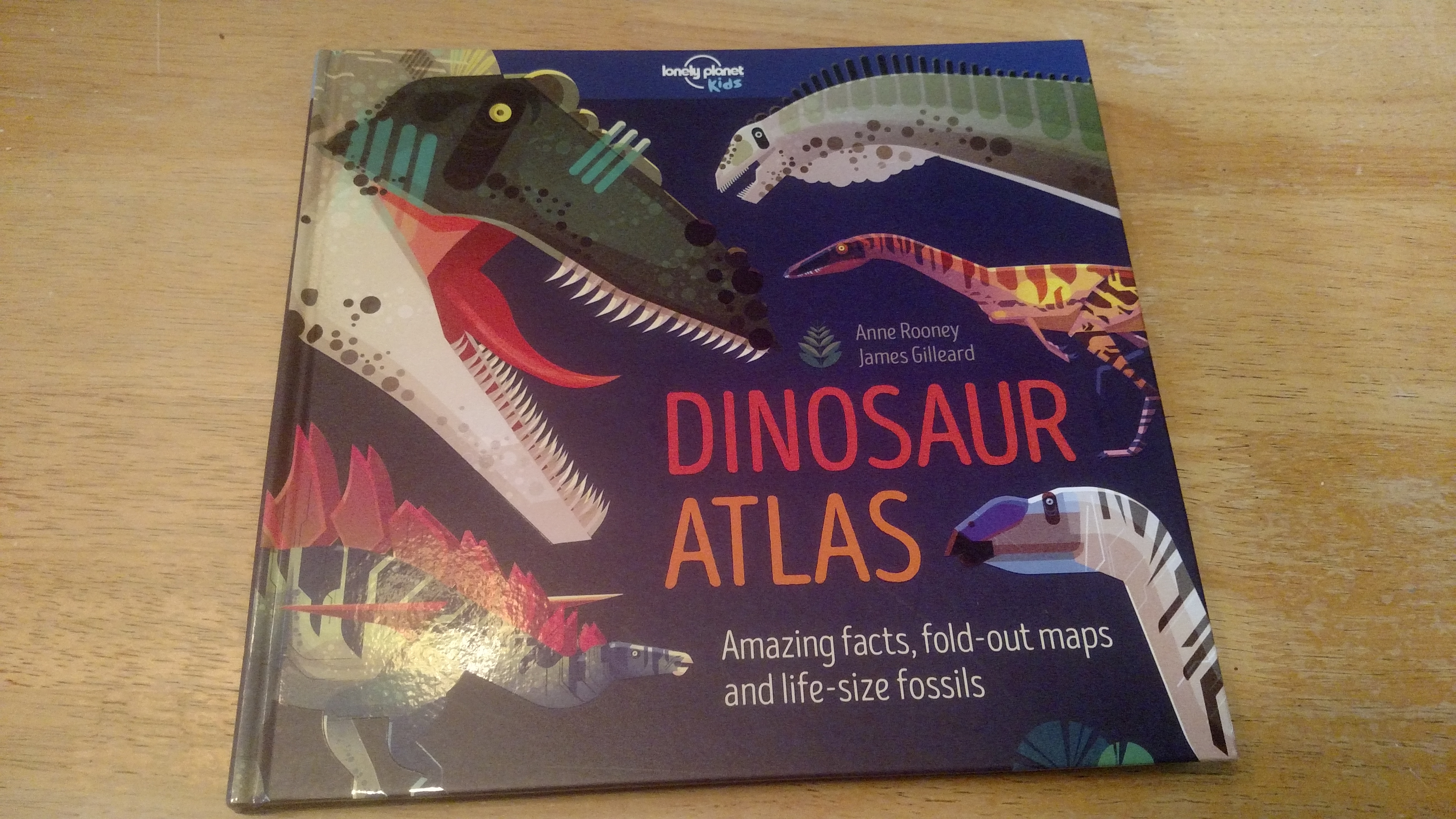 I love how this book is organized by continent, complete with maps and details about specific dinosaur fossil sites. So we learn which dinos lived where. S loves the life-size photos, like the “actual size tooth” of a T-Rex and the “actual size jaws” of a Anhanguera (link included for those of you who–like me–might not know what an Anhanguera is).

I know there are plenty of excavation kits and dinosaur books out there, but these are excellent choices for your little paleontologist. 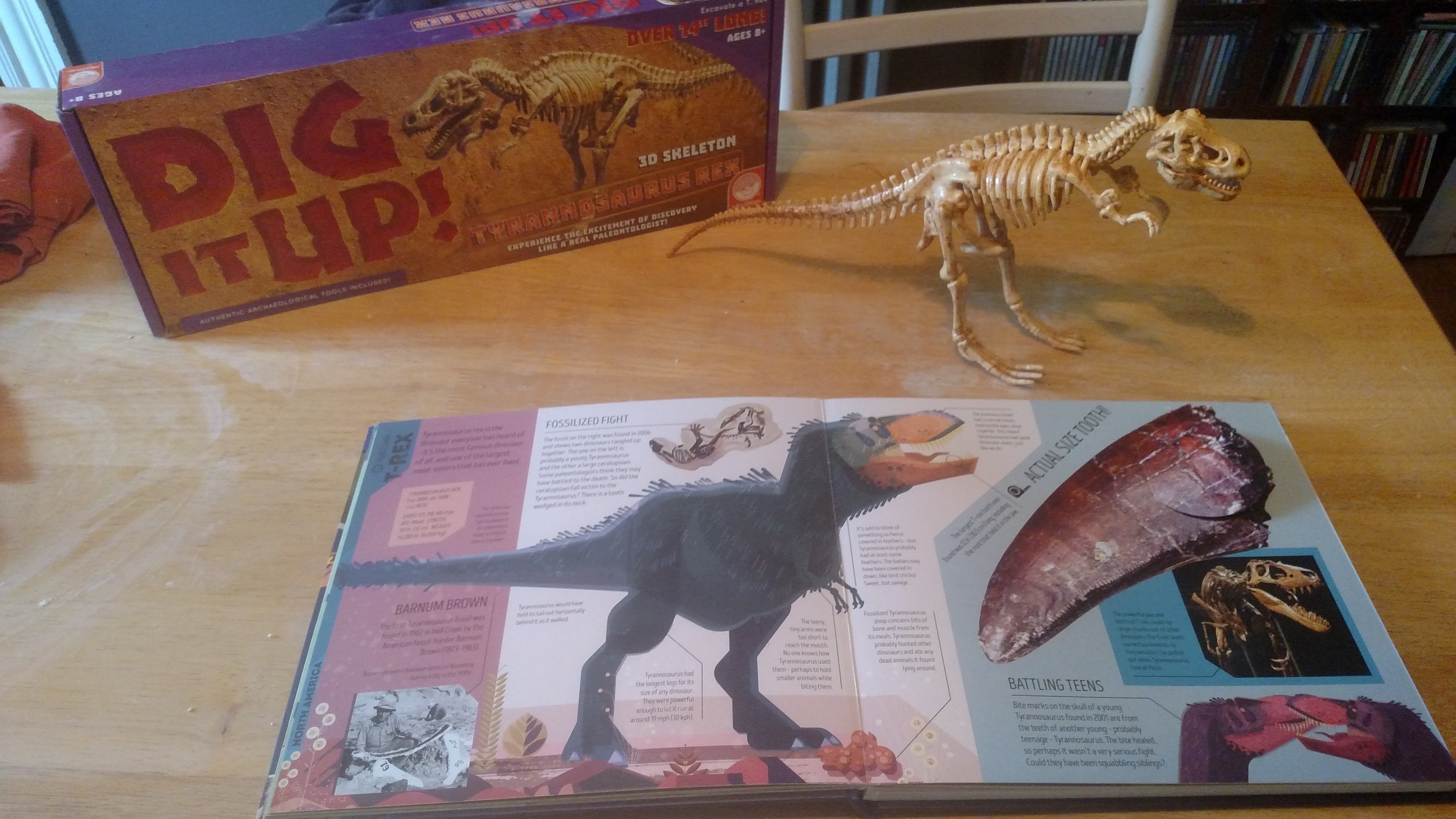