Skip to content
Mara VorheesNovember 26, 2013May 26, 2022 Central America & the Caribbean, Costa Rica, Destinations, How to Travel with Kids, Tips

Alajuela, Costa Rica – One of my travel truisms is that all the best places are hard to get to. You can’t just take a direct flight to paradise. It requires multiple flights, perhaps on tiny airplanes. Or – even better – multiple forms of transportation, including a ferry ride or a long drive after landing.

Usually, I’m pretty anxious to get there. I have to admit that I have subjected my family to some very long travel days in the interest of reaching our destination in one go.

And it is nice to wake up to vacation, as opposed to waking up to more transportation.

But it’s not so nice to wake up to an empty fridge, which is what happens when you arrive at your rental house in the middle of the night.

Also, the arrival itself… Upon review, I realized that the arrival is always a disaster.  It’s the
same scene every year—just change the country. The twins fall into a deep sleep on the long commute from the airport to the house. But of course they wake up during the transition to a strange bed in a strange place. And you can imagine what ensues: miserable, mind-numbing, inconsolable meltdown. It happened when they were just seven months old, when we took our first international trip to Belize. It happened the following year when we went to Mexico. And it happened last year in Costa Rica.

I finally learned my lesson. This year, after a full day of flying and an excruciating shuffle through immigration, we went straight to the Trapp Family Hotel, which is a stone’s throw from the airport. The hotel shuttle picked us up, so we put off dealing with the car rental and we avoided the stress of taking a taxi. We arrived at the hotel, the twins ran around like
lunatics, we ate dinner, we watched TV and we went to bed at a reasonable time. Everybody was tired but happy.

I was sort of dreading the second travel day that would follow. But the next morning, with a full night’s sleep and a fresh mind, it did not seem daunting at all. The hotel served us a big breakfast. The car rental company brought the car to the hotel. And the twins spent the morning in the swimming pool.

We woke up to vacation, even though we had not officially reached our destination. Light bulb.

I’m a little embarrassed that it took me so long to figure this out. In the interest of maximizing the vacation, I had been adding a whole new layer of stress. Much better to remember the wise words of TS Eliot, who said “The journey not the arrival matters.” Also, it doesn’t hurt to choose a transit hotel with a swimming pool. 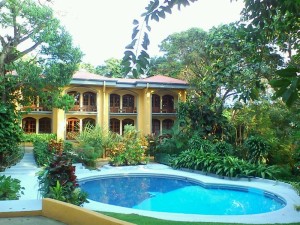