Boston, Mass – It’s been a year since our last visit to the Boston Children’s Museum. There is always a ton for the twins to do there, but I have to admit that I have felt a little gypped in the past because they were always too timid to play in the museum’s centerpiece, the New Balance Climb. 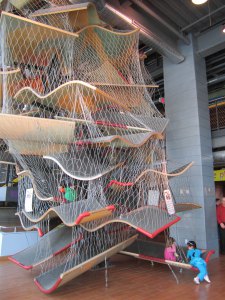 This awesome three-story climbing structure is totally enclosed by netting, so it is perfectly safe, but it requires navigating, climbing, squeezing and sliding (not to mention overcoming acrophobia and claustrophobia) to make one’s way to the top and back down again. Most intimidating for my kids, I think, is that it is often packed with other (older) kids, so it’s easy to feel crowded out of an already small space. I saw one mom venture in to rescue her kid–very impressive maneuvering on her part!
I’m thrilled to report that when we visited this week, my guys finally got their courage up. It took a few tries, but eventually they were finding secret passageways, hiding in dead ends and exploring that crazy maze with no inhibitions. Twin V was definitely the more cautious climber (once again defying my characterizations of who’s who), but he gained a lot of confidence from being with his brother. Watching them from the sidelines, it made my heart glad to see them exploring together and showing each other what they discovered.
One time, Twin V got separated from his brother and he got confused about how to get down (and out) from the climbing structure. He started to freak out. I was right nearby, but I was on the outside, so all I could do was talk him down and try to show him the route. It wasn’t so easy– partly because I wasn’t sure, and partly because Twin V was starting to panic so he was not really listening to me.
Then a little angel appeared. It was a little boy with black hair and blue eyes, a year or two older than mine. “I’ll show you the way out,” he said. “Come this way.” Twin V immediately trusted him, and followed him, and they arrived at the entrance/exit within a few moments. It was a simple act, but it meant so much to Twin V, who gushed about his new friend for the remainder of the day.
It was not the only time I witnessed such cooperation on the climbing structure. Later on, Twin S had ventured pretty far up and he couldn’t figure out how to get down. A group of older kids invited him to follow them down to the ground. The funny thing was that they didn’t really know the way–at least not the most direct way–but Twin S tagged along anyway and felt better just for being included in their group.
On the Children’s Museum website, it indicates that playing on the New Balance Climb teaches kids communication, problem-solving, mathematics and visual-spatial thinking, as well as good old-fashioned physical fitness. I’m not sure about the math part, but I watched my kids (and others) practice their skills in all of these other areas. And I never would have guessed it, but the one that impressed me the most was they way they used their communication skills to cooperate and help each other out.
boston, children's museum, massachusetts, museum, playground