Winchester, Mass – We still have one kid in a cast (albeit a waterproof one) and one parent with a deadline hanging over her head (albeit a less stressful one), so it still does not feel like summer is in full swing. But, actually, it’s swinging… and it’s going to swing right by if I don’t start paying attention.

Daddio has started to check off his list of summer activities with the twins (his `summer bucket list’, if you will). Yesterday morning, while I was “at work”, they headed out for the Middlesex Fells Reservation, loaded up with a backpack full of drinks, snacks, swords (for fighting dragons) and shovels (for digging for treasure). Moments before walking out the door, Daddio dashed off a treasure map. And they were off.

Three hours later, the adventurers came home, full of stories. They had followed a secret trail, escaped from a mean dragon and discovered a giant’s castle. Best of all, they had filled their backpacks with priceless treasure, including the King’s ruby (a bike reflector) and sapphire necklace (some plastic beads) and a magic golden horn (a kazoo).

In case you’re wondering, the treasures were plants. Even the twins knew it, as they went digging through Daddio’s backpack before they left the house. We’re going to have to work a little harder than that if we’re going to fool those nosy parkers.

But it didn’t matter. The twins were over the moon, retelling their adventures, showing me where they went on the map and examining their precious treasure. They couldn’t stop talking about it. Specifically, “when are we going to go back to the forest and look for more treasure?”

It was a brilliant move on Daddio’s part–and a perfect way to visit the Fells, a local natural resource that we don’t take enough advantage of. (Our last visit to the Fells was when I was pregnant.)

That afternoon, Daddio “went to work” and I took over childcare, happy that the twins would be worn out from their active morning. Late night hours have become my most productive work time of late, so–operating on half a night’s sleep–I was looking forward to a quiet afternoon of books and puzzles, or at least playing in the backyard or maybe going to the park.

After a morning of hunting dragons and exploring magic forests, do you think the Adventure Twins were interested in books and puzzles? “When are we going to go back to the forest and look for more treasure?”

I could not for the life of me engage them. They were just not interested in anything I had to offer. Maybe my heart wasn’t in it, given the four hours of sleep. But the only thing I could get out of them was “When are we going to go back to the forest and look for more treasure?”

I finally broke down… “If you clean up all these toys, we can go look for more treasure.” I’ve never seen those boys put away toys so efficiently.

I actually thought that we could go on a little treasure hunt to the Prospect Hill Tower, which is a short walk from our house. But Twin S was having none of it. He wanted to go back to the Fells. He also would not let me bring the “treasure” that they had already found in the morning. “No, Mama, we have to find NEW treasure! There’s treasure everywhere!”

My kid was becoming increasingly demanding and this activity was becoming increasingly complicated. And I was not happy about it. Twin S went upstairs and cried to Daddio that I was doing it wrong (which was fine with me because I secretly blamed Daddio for getting me into this), and I went into the basement to find some treasure. I then consulted Twin V on snacks. I completely forgot about the map, but fortunately they did too.

Finally, we were off. And I had a BAD attitude.

The beautiful thing about the car, is that sometimes the twins just sit quietly and look out the window, which is a relief. Also, they sometimes fall asleep, which is even more of a relief.

By the time we got to the Fells both twins were out cold. So I pulled into a shady spot and dozed off myself. When we awoke, we had magically transformed into a happy, pleasant, loving family. Amazing, what a power nap can do. 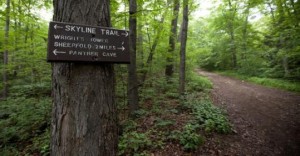 Now, we were really off. Twin S led the way,  feeling confident after his earlier successes. Twin V was less surefooted, but clearly excited about the adventure ahead. They recognized the trail they had followed in the morning to Bear Hill Tower, and deliberately chose an alternate route (to Panther Cave, according to the sign). They had absolutely no qualms about going off trail to climb on rocks, explore the cave, find a lookout and–of course–look for treasure. This made me nervous: the Fells is some 3400 acres and I do not have a great sense of direction. I did not relish the idea of getting lost with my 4-year-old twins. I was also distracted by the fact that I was somehow supposed to discreetly hide these treasures in a place that they (we) would be able to find them. 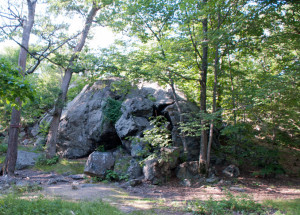 But we made it to the Panther Cave. The panther wasn’t there, thankfully, but the twins found his stash of valuables, which included a treasure chest (a cookie tin filled with shiny ribbons), dinosaur bones (a plastic alligator skull left over from our defunct fish tank), an ancient Mayan urn (a colorful Russian souvenir), and a jar of marbles (a jar of marbles). We also took the opportunity to have a snack.

Of course I don’t have any photos, because I was too cranky to bring my camera.

Nice one, Daddio. But don’t bother crossing it off the list.