Ostional, Costa Rica – Exactly two years ago, we took a turtle tour to Playa Camaronal, where we witnessed one brave olive ridley turtle, as she diligently, laboriously, dug her hole, deposited her eggs and returned to the sea. Last night at Playa Ostional, we witnessed thousands of olive ridleys performing this same ritual, in a mass nesting known as arribada.

I asked the twins how many turtles we saw last night. Twin V estimated 20,000,700, while Twin S guessed about 60. I think it was actually somewhere in between. (Our guide informed us that an estimated 30,000 turtles had nested on that beach the night before.) 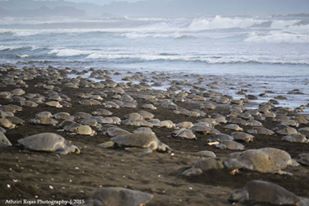 Once a month from June to December, olive ridley turtles descend en masse on their natal beach. They gather off-shore, then over the course of three or four days, they come up to the beach to lay their eggs. The beach can be so thick with turtles that it’s difficult to navigate between them. This was an incredible thing to witness. (Thanks to Asociacion de Guias Locales for the photos.)

Last night we followed one mother through the whole process, which takes about an hour. I sat on the sand with the twins and we watched closely. She was missing one back leg, which made it much more difficult to dig that 12-inch hole. But she did it. And just like last year, we could see the eggs drop out into the hole — life at its very beginning.

Unlike last year, we kept getting distracted, as other tortugas lumbered by. Often we had to scoot out of the way, so as not to impede the progress of a turtle making a beeline to the waves. At least once, another turtle climbed right over our mother, seemingly oblivious that somebody was in her way. On another occasion, Twin S and I had to stand perfectly still and skinny–like pedestrians caught between lanes of traffic–as two turtles charged by us in opposite directions. One step forward or back, and we would have caught one under our feet.

Sea turtles are extremely sensitive to artificial light, so there is none on the beach. The guides used red lights so we could see up close, but otherwise there was only starlight. Because it was so dark, it was difficult to get a sense of the vastness of the phenomenon. But I guess it wasn’t that difficult, considering Twin V’s estimate.

(Incidentally, during arribada, the turtles start coming ashore just before sunset; next time we will go in the late afternoon and see it in daylight.)

So how do the ridleys manage to all show up in the same place at the same time? And why? Scientists don’t know exactly. (For once, I didn’t have to fake it when answering the twins’ questions. “I don’t know” was a totally legit answer.) And how do those brave mamas find the strength to haul their heavy bodies out of the sea and burrow deep into the sand? They are clearly exhausted by the process. And how do those little tortuguitas know where to go, when they emerge from their eggs two months later, by which time their mother is long gone?

It’s a marvelous, mysterious place, this planet Earth, inhabited by some strange and glorious creatures. How fortunate we are to bear witness.