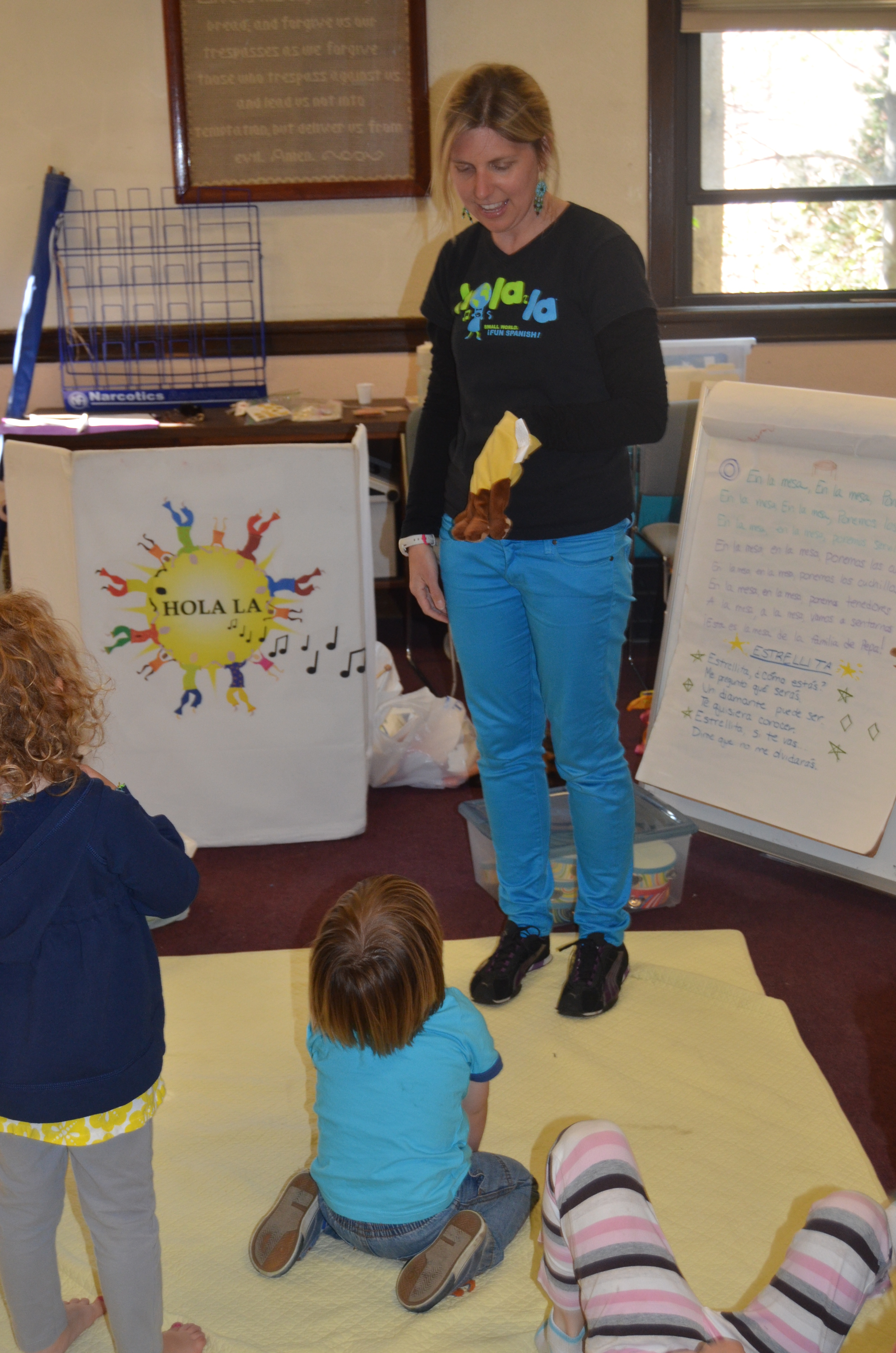 Watertown, Massachusetts – Today was our last day of Hola La, a Spanish class that twins (and I) have been taking this spring. This is part of my effort to raise bilingual kids which I recently wrote about.

I have to admit that I have been wondering if this class was worth it at this young age. The class was fun, the activities were entertaining and the teacher knew how to interact with small children (thanks, Señora Kristen!). But it seemed like I spent most of the time chasing down the twins and bribing them to sit still and listen. Even when they were engaged with the activity at hand, they still were still speaking only English words.
So much of what we do seems to involve weeks of cajoling (me) and resisting (twins), before a breakthrough finally occurs. Then suddenly, the twins embrace the activity and start doing it and loving it with little or no outside encouragement. This is definitely what happened when both twins started to swim and when Twin V started to ride his trike (still waiting for Twin S on that one). And this is what happened with speaking Spanish in the last few weeks of Hola La.
The class centers around two puppet kids, Pepa and Pepe, and a bunch of puppet animals. The twins adore the puppets. In fact, there were times when both boys were running around like little wild ones for the whole hour, but then they suddenly plopped down and watched with rapt attention when Señora Kristen worked her magic with the puppets. 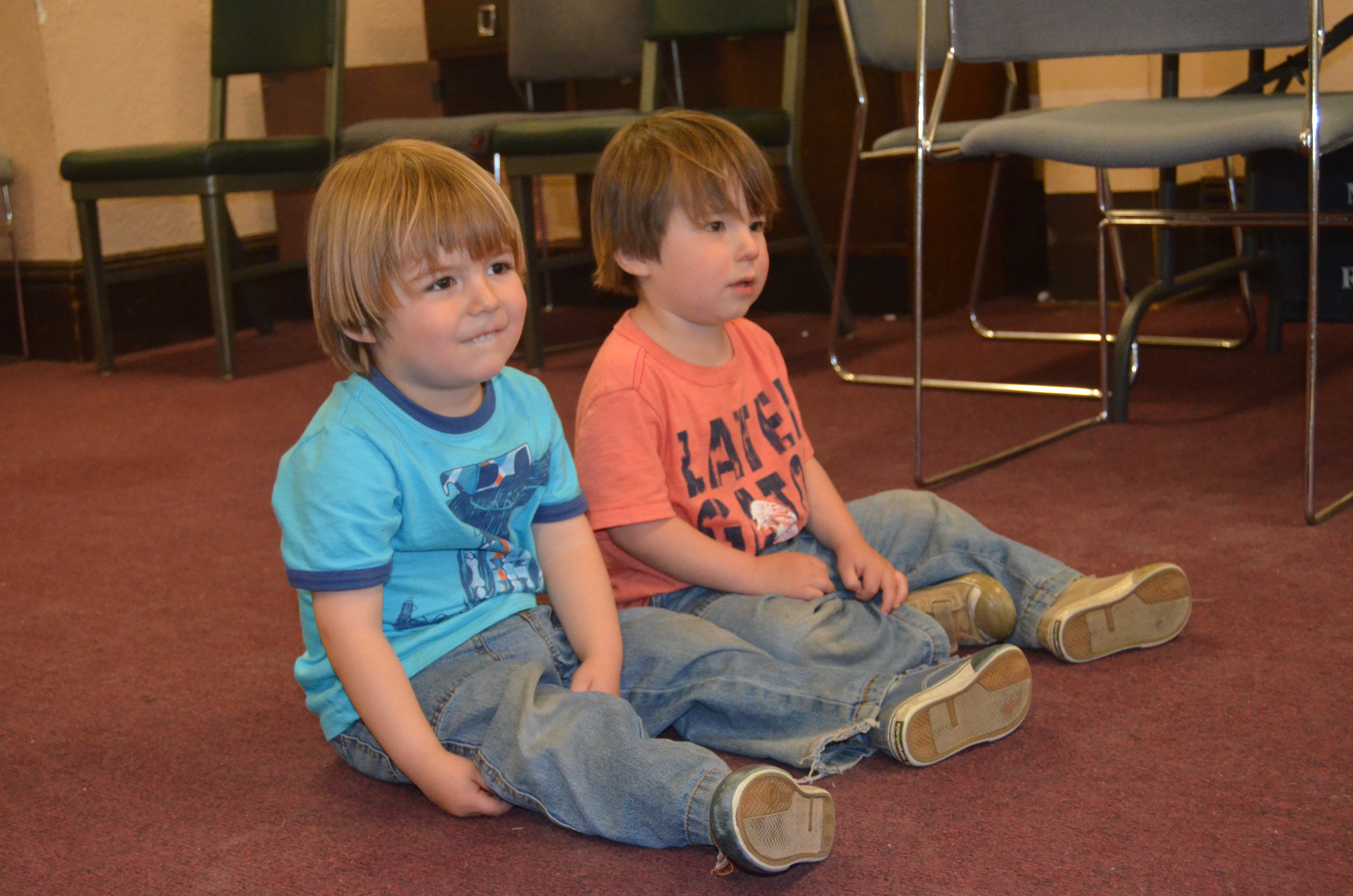 The whole class is super interactive, with lots of activities, songs and props to keep the kids engaged. Everybody got to shine little flashlights on the ceiling while we sang ¿Estrellita, como estás? (Twinkle, Twinkle). There was a song for learning the days of the week and a game for practicing numbers. There were even outdoor activities when the weather was nice.
Every week we sang ¿Que tiempo hace hoy? (What is the weather today?) to the tune of London Bridges, and the children would offer up answers based on different pictures. Twin V loves this song. He loves it. He sings it with such earnestness and without a hint of inhibition, it’s pretty adorable. That said, up until today, neither he nor his brother was willing to answer the question being posed, even with much prodding. Today, out of the blue, both twins were freely throwing the weather terminology around, which is to say that they were basically repeating what I was saying; but this is huge progress for two kids who were too shy to say anything in Spanish.
The theme for this spring session was La Mesa Familiar (the family table). So each week, the kids would help Pepa and Pepe set their table with dishes, utensils and different kinds of food. The kids would vie for the chance to give them carne or manzana or leche or – the grand prize – helado. In order to get an item, the kids had to say the word in Spanish.
How the twins resisted this! They would stand there making goo-goo eyes at Señora Kristen while she told them exactly what they needed to say, waited for their response, and finally gave in and turned over an item (though usually not the much coveted ice cream).
A week or two ago, Twin V finally realized that he could get the ice cream if he just would say the word in Spanish… and the rest is history. Twin S saw the results and followed suit. Yesterday, for the first time, the two of them were asking for (and receiving) every item on the table, all in Spanish. Again, they were basically just parroting what I was saying, but they had previously been too self-conscious even to parrot.
Needless to say, I am pretty thrilled. Hola La was not cheap, but I feel like it was money well spent. The twins had lots of fun; they got a little more exposure to Spanish; and most importantly, they seem to have overcome much of their inhibitions about speaking. All those weeks of cajoling finally paid off.
bilingual