Boston, Mass – We have lots of extended family in town this weekend–grandparents, aunts, uncles, cousins galore. We have a full docket of activities lined up, starting with a whale-watching cruise with the New England Aquarium.

This was a perfect activity for a large group of people. Everything was organized in advance, so there was no need for our people to make any decisions. We were stuck on a boat together (so we were spending time together), yet it was a big boat (so not that close together). Of course whale-watching is not unique to New England, but it is pretty special, especially for the family members that were coming from inland locales. And with temperatures soaring into the 90s, everybody was pretty pleased to be out on the water!

The ride out was pretty spectacular, with stunning city views and that glorious ocean breeze providing some relief from the heat. The destination for all Massachusetts whale-watching boats is Stellwagen Bank, a national marine sanctuary that attracts whales, dolphins and prolific bird life. We spent all morning with three humpback whales, who put on quite a show for us. (You can read the naturalist’s notes here.)

The twins gave the whale-watching trip mixed reviews. Some 60 people were on our boat, and they all wanted to get a look at the whales. And take pictures. And take videos. It didn’t help that we didn’t know where the whales would turn up (ie, which side of the boat). It was frustrating that the kids could not get up front to get a good view, unless the whales happened to pop up right in front of them. This never happened.

We finally put Twin V on my shoulders so he could see over the crowds. I think he had a great view from up there (certainly better than I did) and he seemed to really enjoy himself. 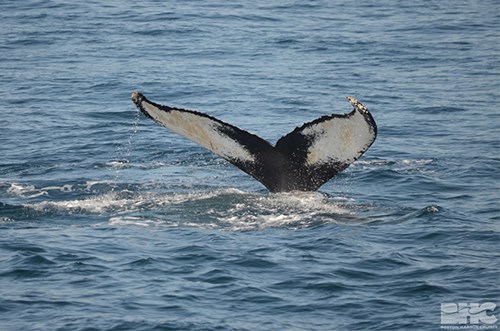 I obviously could not take any pictures as I had a child on my head. So thanks to Boston Harbor Cruises for the photo.

Twin S, on the other hand, did not want to wait around to find out where the whales would pop up. He didn’t want to go on anybody’s shoulders. And he certainly didn’t want to fight the crowds to get a front-row spot. He got one glimpse of a whale tail, which gave him the right to say “I already saw it” whenever we suggested he come for a closer view.

That said, right before we left, a porbeagle shark popped up right in front of Twin S, which was pretty awesome. I think it’s the only animal that he really got a good look at all day.

But even if he didn’t love watching the whales, Twin S seemed to have a pretty good time just being out on a boat, watching the other boats and all the other activity in the harbor. And let’s face it, Twin S was our toughest customer.

Indeed, all family members gave the whale-watching trip two thumbs up (which comes out to 28 thumbs up, so that’s pretty good).